On Monday Wayne Hewgill of PI Fincorp took the news out of Fortuna Silver (FVI.to), crunched his numbers and raised his target….from $2,45 to $2.70 (report linked here). And here we are just three days later and FVI.to has crashed through his “upgrade” (using the term as loosely as possible) so presumably there’s a whole swathe of PI Fincorp clients that’ll be hitting the sell button this morning…that right Wayne?

It wouldn’t be so bad, but this is the fifth time (!!) Hewgill has changed his call on FVI.to since September 2009 and always by a few pennies here and a few pennies there. Seriously dude, grow a pair. Take a good look at kitty here cos there’s a lesson here for yaz: 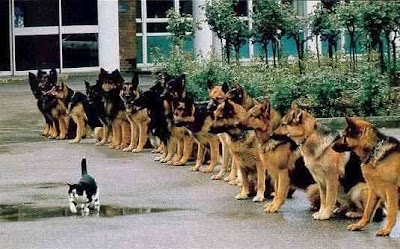 They’re called cojones. Get some.