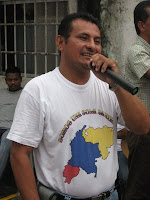 Martin Sandoval: You don’t know who he is. You’ll almost certainly never meet him.
You can help him if you want. Waddya say, dudes?
So let’s see if anyone feels like caring out there today. Here’s a post from the excellent CAJA blog run by Scott Nicholson, A gringo in Colombia fighting human rights abuses at ground level. Here’s Scott’s quick CV blurb from the site:
Scott Nicholson: Scott is one of the founders of Community Action for Justice in the . For the past several years, he has been working in to provide on-the-ground accompaniment to social leaders whose lives have been threatened because of their work to bring peace and basic human rights to their country.
Today, Scott posts that his friend and collaborator Martín Sandoval has been arrested on basically trumped up charges because he’s been too vociferous in his protests about extrajudicial killings by the Colombian army (well publicized recently). Here’s how Scott’s note starts:
xxxxxxxxxxxxxxxxxxxxxxxxxxxxxxxxxxxxxxxxxxxxxxxxxxxxxxxxxxxxxxxxxxx

My friend, Martin Sandoval, was arrested along with 13 other people here in the town of Arauquita on November 4. He began a hunger strike the following day in protest of those arrests.

Martin is the president of the Permanent Committee for the Defense of Human Rights in the state of Arauca. He has consistently spoken out against the human rights violations committed by the Colombian government in the state – including mass arrests and the killing of civilians who are then reported as guerrillas killed in combat. He has also forcefully denounced the abuses committed against the civilian population by the FARC and ELN guerrillas in their fight against each other in Arauca.

It’s all well and good saying “Oh, isn’t it terrible what’s happening in Colombia”, but here’s a chance to do something that won’t eat into your day. You might even get the satisfaction of knowing that an innocent man was set free thanks to your efforts and the efforts of others.

The small victories of life all add up in the end. Go on…I dare you….take action on this one.