I’ve never looked at this Louis Lobito Little Wolf Casey Research pump job more than fleetingly, but after all the mine closure/suspension hoo-hah in the last seven days, and then including the way Lobito reassured his followers last Friday that it was a hold and the suspension was much ado about nothing but then this Thursday morning did a 180° turn and called sell on the stock (when halted, then claimed he was out at 9.5c when the stock dumped to 5c), all this BOZ silliness had caught my attention. And then of course the CFO resigned suddenly on Monday. Nice touch.
So anyway to get to the point of this post, while checking SEDAR tonight I noticed that BOZ.v had filed its quarter this evening so with interest piqued, I checked its financials for the first time ever.
Seriously. I mean, seriously, how can anyone in their right mind like a company with a balance sheet like this? Let alone somebody as dangerous to other people as Lobito who recommends it to other people. Especially when those people are a bunch of naive sheeplike followers who require a little expertise in the sector, not tripledumb investment advice? And on checking back this evening we note that Louis Lobito Little Wolf James has been reco’ing this stock constantly since 2012 since prices of 76c (and his “stink bid” price on it was 45c…did he tell you to back up the truck when it went through that price?) and all the way down. 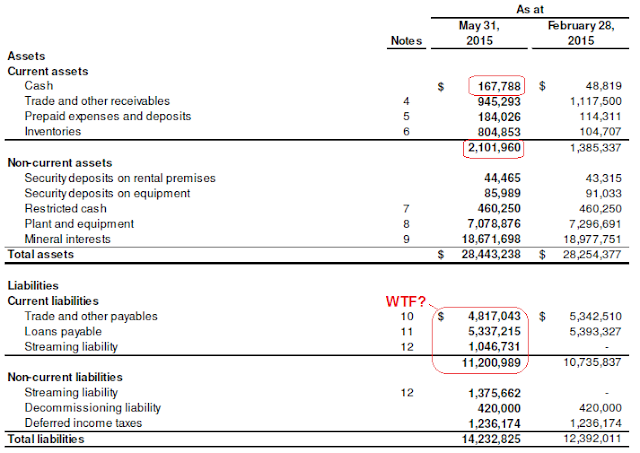 This is madness, it’s the type of thing that people who do not understand financials buy. Look, that’s $11.2m in near-term financial liabilities, less than $170k cash, all on top of a mine that even if it was working right gives tiny gold production per quarter that makes an operating loss at $1,200/oz. There’s no way, repeat no way, as in NO FREAKING WAY that debt gets paid without cash crunched to zero and beyond and that means even if BOZ can find somebody stupid enough to lend it some more cash the shares are going to be decimated even further, one way or the other. But you didn’t need to know the May financials to come to that conclusion, it was already baked in. Obviously.
I knew Louis James was stupid about geology. I didn’t realize how stupid he was about financials. The above is just plain embarrassing, it’s amateur hour level.

UPDATE: More on the subject here.