A copper cartel: Too ridiculous for words 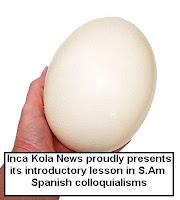 “When two close brother countries that produce copper compete, prices decline and both of them earn less,” President Alan Garcia told reporters in Lima. “It would be a very important thing to lay out and co-ordinate our policies.”

An OPEC-like copper cartel would aim to stem a steep slide in prices that has reduced mining profits and investment and boosted unemployment, slowing both countries’ economies.

Chile produced 5.6 million tonnes of copper in 2008, while Peru produced 1.3 million tonnes. Yet prices have dropped more than 60 per cent since last year as economic turmoil slows global demand for the metal, with copper futures for May delivery closing at $1.54 per pound in New York on Friday.

The decline cut net income at Chile’s state-run Codelco, the world’s top copper miner, by nearly half to $4.5 billion in 2008; while Southern Copper Corp., one of Peru’s biggest miners, posted a $125 million net loss in the fourth quarter, compared with a $311 million profit in the year-ago period.

Meanwhile, 9,000 miners have been laid off in Peru and new projects have been suspended, including Southern Copper’s plan to invest $1 billion in the Tia Maria mine. The cutbacks already helped slow Peru’s yearly economic growth rate to five per cent in January.

The world’s last copper cartel, the Intergovernmental Council on Copper Exporting Countries, was formed in the 1970s by Peru, Chile, Zaire and Zambia. It was dissolved in 1988 after limited success co-ordinating supply.

Miners previously worked together to set prices, with companies like Anaconda, once the world’s biggest copper producer, joining the now-defunct International Copper Cartel in the 1920s.