…was sent to subscribers about ten minutes ago (i.e. just before 9am EST and a good half hour before the opening bell).

UPDATE: On a difficult day I’m going to shamelessly toot horn a bit. Some reactions to the Flash update from subscribers via reply mails (which are never solicited but always welcomed):

“What an excellent report!  Nice job.”

“Thanks. This is exactly what Iexpect from my investments’ Godfather….(in the Latino-Catholic sense, not the gringo sense)”  (subscriber JO)

“Thanks for your opinion, appreciated as always.”

“Thanks, agree and appreciated!”

Away from those one line replies I’ve also had two or three longer mails that pick up on the  market craziness and panic noted in the Flash update sent this morning. One also said that I should reprint the Flash update on the blog here, which i may do later (but prefer that the people who kindly hand over 25 dollars of their hard-earned per month benefit first in line…it’s only fair, after all), perhaps after the bell today to show you what goes on in the Weekly service. It’s not just a Weekly letter, y’see. DYODD and take a word of advice from Douglas Adams: 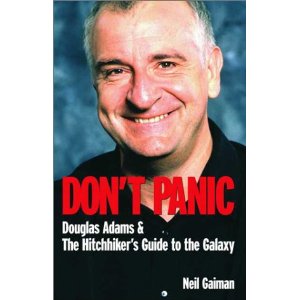 Your humble scribe may be a market whuss, but on the other hand he’s not hard-wired to panic, either.