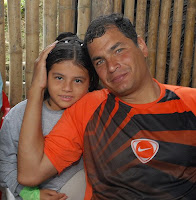 For Bina, to help with those dreams
Three or four interesting developments. Firstly, those scallywags at Bloomberg found they had to change the title of their report from this one this morning….
Ecuador’s Bonds Fall as Debt Commission Prepares Final Report

…to this one this afternoon.
Ecuador’s Bonds Gain on Speculation Ecuador Will Make Payment

And the sneaky part is that they decided to use the same URL, presumably hoping their biased call would be buried. OTTO IN DA HOUSE!

Next, the gov’t is beginning to show its “mining friendly” colours by lifting import tariffs on mining equipment such as heavy plant. Here’s a link to that one.

But at the same time, AP reports that Ecuador is about to slap bigtime import controls on a raft of goods, and has President Studmuffin saying that he will not allow Ecuador’s dollars to be spent on imports such as “Colombian caramels” and “Chinese dolls” amid darkening financial forecasts. Because of this attempt to jumpstart the local economy the Central Bank bigwig Carlos Vallejo is staying with the official forecast of 6% GDP growth for this year.

At the speech given by Studmuffin, AP also reported him as saying he does not believe there is a high probability of fiscal crisis for Ecuador. But weirdly DJNW was at the same speech but came away reporting this. Mondo Bizarro, isn’t it?

“QUITO -(Dow Jones)- The Ecuadorian government has decided to raise the tax on capital outflows to 1% from the current 0.5% and to restrict some imports in the wake of the unfavorable effects of the global financial crisis, President Rafael Correa said Tuesday.

As a consequence of the global crisis, “we could have problems in financing investment in 2009. There could be a possibility of problems in the balance of payments and restriction of financing,” Correa said.