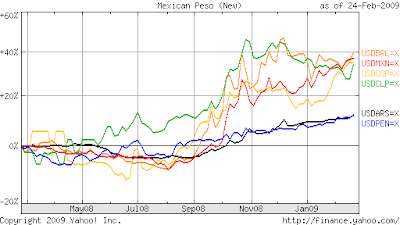 …….and we see the Argentine Peso and the Peruvian Sol as having held up the best…so far. But looking at the shorter-term movements….. …..it’s the Chilean Peso that has kicked back strongest in the three month period chosen by default, care of Yahoo Charts. That would be the moment when Bachelet&Co stopped the free-floating rot and due to direct, Keynesian government intervention policies and self-protection, dontcha know….

As just one example of the consequences here, the relatively strong dollar helps LatAm exports, of course. However you would expect a strong dollar in a time of strong US economy, not right now in the biggest financial and economic crisis to have hit the industrialized nations (led by the US) in modern times. What’s the use of a strong dollar and its ensuing export market advantage when there’s no market, except of course to make breathing space and prepare the way for the next round of helicopter flights from Bennyboy?

I could go on and on and on with this particular post, as the angles and tangents are manifold. I could talk about that post way back when I said that the US was keeping its dollar as strong as possible to make sure it doesn’t lose its place at the head of the world table. I could talk about inflation risk of weak currencies. There’s the whole issue of how soft pegged currencies like the Nuevo Sol and the Argentine Peso have performed much better than the more freely floated regional currencies such as the Mexican Peso or Brazil’s Real. The case of the Chilean Peso and its dependence on copper is a particularly fascinating one for a wonk like me.

All those and more. But no, let’s stop here. What I really want to say is that Duhalde made a great point yesterday, whether or not he was looking at it in a wider context. The bottom line is that if the USA has decided to protect itself at all costs and let others like us guys down here drown in the muck of its making, then why the **** should we keep playing ball with you guys?

Seriously. What have you guys done for us lately? Your economic policies suck and you still try and tell us how to runs things. You screw up the whole financial world and now you’re getting the innocent victims to carry the can.

It’s taken me a while but I’m beginning to see that Rafael Correa is absolutely right, basically because I’m not as smart as he is. Take your sovereign bonds, gringos, and stuff them where the sun doesn’t shine. We have an abundance of water, farmland, power supply, region-wide democratic governments and importantly a population of caring, kind, willing and hard-working people, from Tijuana to Tierra del Fuego who are evermore pissed at the way the USA and the wider world community has been treating them all this time.