A quick illustration as to why Chile’s 8.2 mag quake is no longer big world news

Your humble scribe was rummaging around the internetwebpipes looking for other things and came to this newswire front page. On it (while looking for something completely different) an automatic video newsreel started running. It was a Spanish language report on the clean-up process now underway in Iquique after the big quake and as I watched, this image showed up: 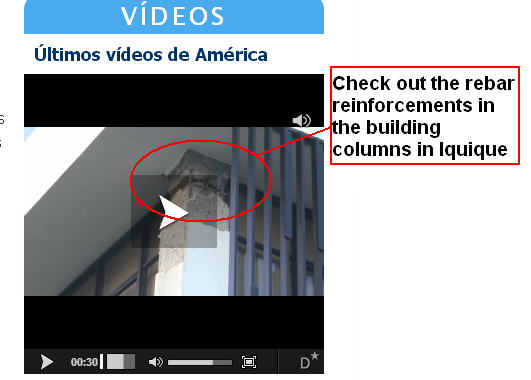 See that Rebar? That’s what good buildings have in seismic areas (for example, the house in which your humble scribe is currently typing these words, as it was built by us) and it’s precisely that kind of building standard that allows the very big quake and its aftershocks in well-built Iquique to become a minor news item just days after the event. Because that building was put together correctly, the very large and heavy concrete roof sheared and wobbled horizontally, causing the damage seen, but didn’t break off and pancake the house to nothing. Meanwhile, we’re still talking about the 2010 Haiti earthquake which measured at 7.0 mag, precisely and exactly because nobody could be bothered to put rebar into any of the concrete columns. Result, 220,000 dead bodies.
Putting quality rebar into columns costs money (I remember the cash outlay very clearly, but knew then and know now when money gets well spent), which may be why best estimates, by people who only get interviewed on TV after a big seismic event and are then quickly forgotten, are that around 70% of buildings in the Lima/Callao conurbation (pop ~9m) of Peru are not built to the necessary standards and won’t withstand a major localized earthquake. I sincerely hope it never has to be tested in either location, but I’d bet that a major (i.e. 8+ mag) quake just off Santiago de Chile would cause hundreds of deaths, while one just off Lima would get them counting in the tens of thousands.
No news is good news and the way the big Iquique quake has dropped off the world’s news headlines is credit to the way in which Chile has prepared for such an event.

PS: Mickeyman over at World Complex commented this:

Sometimes the rebar is in the concrete, but not anchored to anything. After the pancaking, the columns still look fine

That’s true. Architectural standards are very much part of the standard/substandard argument, who builds the house is as important as what goes in it. As another example, I’ve seen buildings being put up nearby with 1/4″ rebar (four per column), when the absolute minimum for a one storey building in a seismic zone should be four 3/8″ rebars in each column and preference is for 2X 3/8″ and 2X 1/2″ in each column. The difference in rebar widths and quality shows up in the price you pay for each bar (1/4″ bar is cheap, 1/2″ bar is not…again, I remember it well) and a housing developer can shave a lot of cost from any given project (the cash saved going into his back pocket and not the ticket price of the building, of course) by using a lesser quality piece of metal. Again, I’d be utterly unsurprised to read of architects and/or construction empresarios in Peru spending years in jail for negligent homicide cases if a big one hits a big population zone on the coast.