Sulliden (SUE.to): In which IKN explains why you should never invest in a company run by Stan Bharti

The short explanation is that Stan Bharti and his Forbes Manhattan cronies only care about inserting the maximum amount of banknotes into their own pockets at the expense of others. Here comes the longer answer.
True with the very recent example of Aberdeen International (AAB.to), which is well documented in this script (and here’s how the piece starts):

It was a tough year to be a shareholder of Aberdeen International ( AAB.TO). In the first six months of 2012 the net loss amounted to over $26MM or over 25% of the assets, the net asset value (NAV) at the end of the period was less than $72MM (from $136MM in the early 2011), the share price declined 40%, and the market cap dropped under $35MM. But while shareholders felt the pain, the management was doing great: “salaries, consulting, benefits, and bonus” increased sharply compared to prior years: for the past six months it was $5,459K compared to $600K in 2011 and $798K in 2010. Most of the difference was due to increase in the “key management remuneration” which added up to $4,870K in benefits and shares – 7% of the NAV and almost 15% of the market cap – in just six months. By any reasonable measure, the “key management” awarded itself compensation that is way out of proportion to company’s overall performance or assets.

Aberdeen is lead by Mr. Stan Bharti who is not a stranger to excessive compensation questions. Only this year a similar situation took place at Longford Energy, where Bharti-led management gave themselves seven figures bonuses before being finally unseated by dissident shareholders. And at Bharti-led Forbes and Manhattan Coal ( FMC.TO), where Institutional Shareholder Services (ISS) just this month highlighted excessive executive compensation issues and shareholders are fighting to replace the board (1).continues here

And now Bharti’s hit mob are about to have their jolly way with the treasury at Sulliden (SUE.to), another F&M company. On October 5th (that’s this Friday) the AGM gets to vote on this brand new bonus payments scheme cooked up in cahoots and as the Bharti companies have their votes locked down, you can bet the house it’s approved. 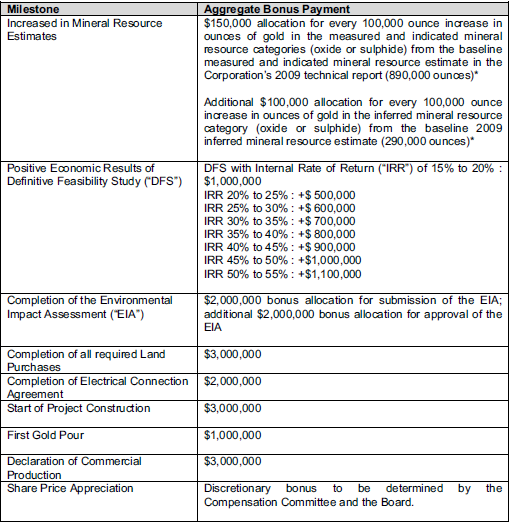 As SUE.to now has the M+I resource at 2.438m oz gold, that’s 1.548m oz difference and good for a $2.3m bonus to the pool of directors.
As for the inferred resource, that’s 3.256m oz and apparently good for $2.9m in bonus payments. To add insult to injury on this one, nearly half that inferred total comes from the sulphide resource and nobody has a clue as to whether that will be economic or ever mined.
Next, the IRR bonus, which is a crock of shit because we don’t know whether it’s based on pretax or post-tax for one thing. Not only that, but any fool can offer up a high % IRR just by changing the gold price assumptions. In the recent feas study results, SUE.to offered us a 52.2% IRR which suggests that directors get to pay themselves $2.1m in bonuses.
Next, these jokers get $2m just for handing in an EIA to the Peru government! It can be a total crock and get rejected, but that doesn’t matter, ka-ching $2m, but if it gets approved, it’s another $2m in bonuses.
The next line items are no less audacious but speak for themselves and mean SUE.to directors get $12m more to carve up amongst themselves if the mine gets to commercial production.
And then note down the bottom, that they’re not that worried if the share price goes up. Cash is king in Bharti’s world, but if by some miracle they haven’t smashed the retail holders into tiny bits by this point, they can award themselves a bonus on share price performance, too. 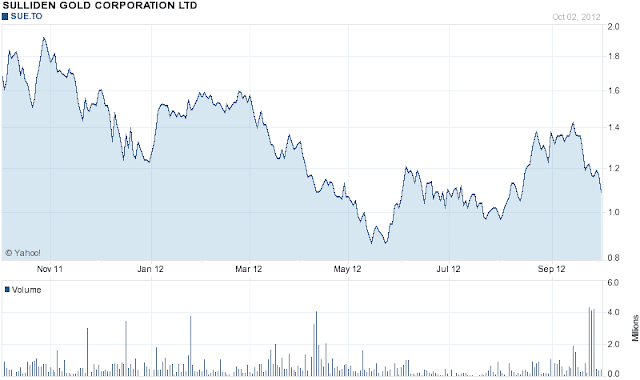 Down 35% in the space of a year…yup, that’s what earns you $7m in bonuses in World of Bharti.
In short, on Friday October 5th, SUE.to will vote and pass the resolution that immediately puts $7.3m of company cash into their back pockets, another $2m by the end of the year when the EIA is handed in and a potential to add $14m more if (big if, considering its location in Cajamarca) it ever gets off the ground. The moral of this story: Don’t let Stan Bharti and his band of self-serving lackeys rip you off and take your money. Let somebody else be their patsy.
UPDATE: Best mail feedback so far comes from reader ‘P’ who IDs himself as a shareholder in SUE.to and then goes on to say:
“…I knew nothing about this! Why didn’t my broker tell me about this?!”
That, reader ‘P’, is a very, very good question. However, if I were you I’d ask your broker about it rather than this humble scribe. And by the way, just to be 100% crystal on this I have no position in SUE.to, not long not short not anything. My only opinion on this stock “avoid like the plague” and I take my own advice.