A Saturday chart: The US Dollar 5 minute chart

Quite interesting, I thought. Thanks to ‘MR’ for the headsup. 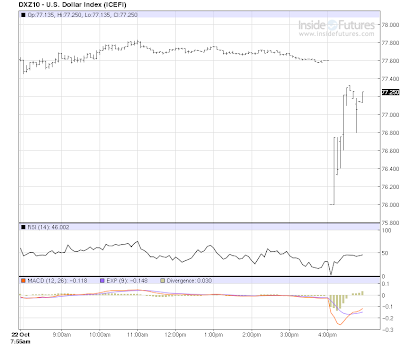 Esp when the plunge coincided with the timing of G20 reports like this one from Bloomie:

The Group of 20 will today pledge to refrain from competitive devaluations and commit to market- determined exchange rates, a G-20 official said, citing a statement to be released after talks end in South Korea.
The International Monetary Fund will be tasked with producing a broader report on currency policies and studying economies with persistant trade imbalances, the official said.

I love that first line, which can be loosely translated as, “No, of course we’re not going to descend into a deval war on our currencies….we’re going to let the banks do it for us. Nothing to see here, move along now, nothing to see.”