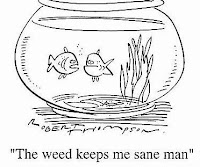 A good job of work done by Alex Barrionuevo in the NYT today on this story about how Chile drugs its fishies up to the eyeballs and sells them to an unsuspecting clientele. No wonder Chile is the poster child of the FreeWorld™ down this neck of the woods: Who needs fresh produce anyway when you can have profit?

Chile used almost 350 times more antibiotics in its farmed salmon in 2008 than Norway, its chief competitor and the largest salmon producer in the world, according to official data from both countries.

Chile’s economy minister, Hugo Lavados, detailed Chile’s use of antibiotics in salmon production in response to a request for information by the environmental group Oceana under the country’s new information access law. It was the first time the government had released such figures publicly, environmental groups said.

“The ministry’s numbers confirm that the Chilean salmon industry has abused the use of antibiotics,” said Alex Munoz, Oceana’s vice president for South America. “They also show that the Chilean government has placed a higher priority on ensuring the profitability of a business sector than protecting consumers and the nation’s ecosystems.”