I received this chart from a friend this morning with the comment “Waddya think, Otto?” (translated… he actually said “Que te parece?” ). For the record, it was taken from this Spanish language chart blog called RoccaCharts and concerns SQM, the Chilean fertilizer and lithium company I’ve mentioned a couple of times on site. 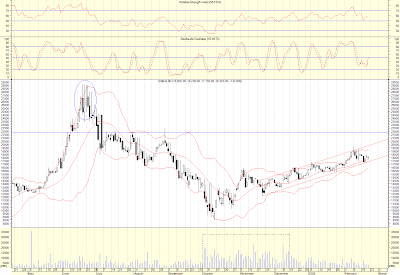 I think the following:

1) What are you doing obsessing over stock charts on a Sunday morning?

2) The chart seems pretty enough, but the last comment written by this Rocca dude just about sums up why I have no respect for the vast majority of this pseudoscience. Rocca wrote* (via Ottotrans™)

“Therefore we have to wait for the first two days of next week’s market to know if it will continue rising, correct inside the orange ascending channel or is broken to the downside”.
Well that’s useful, isn’t it? The crux of the matter is that Rocca has got it covered:

It’s just a pity that said advice takes sitting on the fence to a whole new level and is totally useless to anyone that trades the market. But charties have never let that bother them much, as Rocca is just one example of the crap constantly written by these financial astrologers.

If you don’t have the balls to call a trade, then STFU. Call it “neutral” if you like, that’s fine by me. I do that all the time. But don’t CYA in such a way that you cannot possibly be wrong because that’s just cowardice. If you can’t stand the thought of being wrong, you’re in the wrong game. You WILL make mistakes while trading stocks. If you think you can get it right all the time you are either new to this or plain stupid. Trading equities teaches many things, but wiser people realize it is also a lesson in humility. Pride comes before a fall, they say, so very true for traders large and small. I’ve said it before and I’ll say it again; there is a lot of Zen in the stock market.

Gratuitous and unoriginal rant against technical analysis now complete. Thank you for your attention.