Ain’t no joking with the press for a lefty 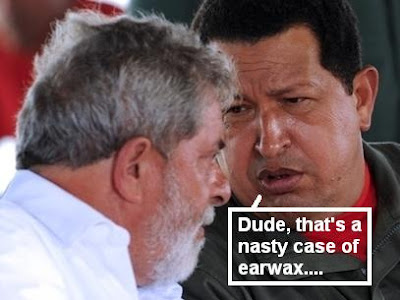 I started a joke
That started the whole world crying
But I didn’t see
That the joke was on me
I Started a Joke, The Bee Gees, 1968
Yesterday, Hugo Chavez was in Brazil to meet with Yoda and talk entry to Mercosur for Venezuela. All went swimmingly and the two pals did their country things. Then came the press conference, which at one point had a small incident that AFP reported in the following way (translated):

In a relaxed atmosphere, Chávez joked with Lula by saying that Venezuela was going through a phase of “nationalizations, except for Brazilian companies (in Venezuela)” which caused generalized laughter at the meeting.

Yep, the anti-Kirchner bizmedia and MSM in Buenos Aires who had watched Chávez recently nationalize the Techint-owned steel mill in Venezuela (and pay a suitable price for the asset, it must be pointed out) opened up with all barrels blazing on Chávez and the way that this dictator friend of the Kirchners was about to take over every Argentine asset in Venezuela and how, of course, Klishtina would start down the same path as soon as the key elections next month were over…..if Argentina lets her.

Once it got to the point of the Argentine industrial union (the biz bigwigs association there) calling for a bar on Venezuela as a Mercosur partner, Klishtina got on the phone to Chávez and asked him about his comments that seem to “involve certain discrimination”. It was only at that point that Hugo realized what he’d done (i.e. had the temerity to crack a joke and treat those present as adults…big mistake when it comes to reporters in South America) and so this afternooon he got his diplo corps to issue a formal communicado that officially tells in official language just how much Venezuela respects Argentina and they’d never do anything to piss them off and it was all a smear campaign by certain sectors of the press etc etc read it here if you like…letterheaded paper and everything.

Moral of the story: Don’t crack jokes in the presence of dumbasses with recording equipment, teeline skills and editors with agendas.