Allen Stanford and Antigua: A history of dirty deals

In the days before the interwebnetpipes, human beings had this quaint method of news dissemination. Called “newspapers”, they were printed out and sold to passing throngs on street corners. 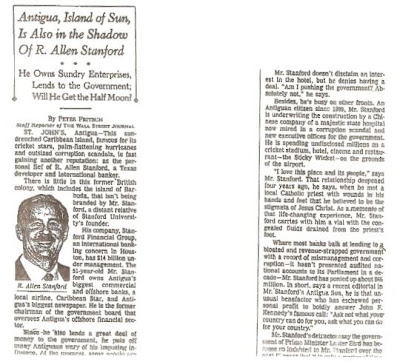 Here are two clippings from one of those newspapers, scanned and put into the real world by a kind someone who then got them sent as far as IKN (by the way, credit will be given if requested…just not sure whether the person wants fame). Published by The Wall Street Journal and dating back to March 2002, it’s a fascinating story about how Cur Allen Stanford used his financial muscle to bribe top Antigua politicians and strongarm his way to getting the best real estate on the island. 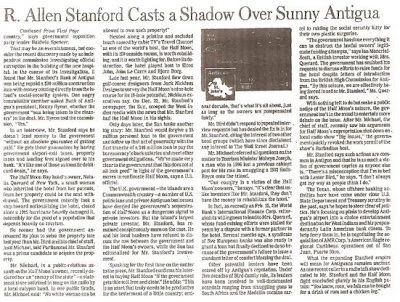 Numbers for “loans” to government include $5m, $40m and $65m, with a tendency for those loans to be “forgiven”. Also, the main theme through the report is how the gov’t suddenly turned hostile against the foreign owners of the Half Moon Hotel, a 100 room luxury hotel on Half Moon Bay that was once lodging space for the rich and famous. Put simply:

FWIW, the hotel was finally expropriated under these very dubious circumstances, something the US gov’t recognized in 2007.

Finally, I’ve cut down on the resolution of the two clippings to make them lighter for the blog. You can still click to enlarge them but they are a bit difficult to clearly read. So if anyone wants the original hi-res versions just drop me a mail and I’ll gladly supply.