…which includes this passage:

It has come to the company’s attention that deliberately false and inaccurate information about the company is being disseminated on-line by or at the direction of parties attempting to discredit the company. The company and its legal advisers are currently investigating the matter and intend to take any steps necessary or appropriate to address the situation. To the extent such parties are ultimately found to be regulated market participants, the company’s legal counsel plans to be in contact with the relevant regulator(s) in order to attempt to hold such parties accountable for their actions and to prevent such misinformation from being disseminated in the future by such parties.

NR here. Well, whatever the BSsers running this shell game scheme are referring to, it can’t be the IKN post yesterday that revealed the RCMP is looking into the company, because that’s 100% dead-set true. As many a scamster junior has learned over the years, IKN Kung Fu is strong.
It’s also worth mentioning something that your humble scribe has noted over the years; it’s always the dregs of Canadian capital markets and the worst of its scumbags* who will race immediately to their lawyers when somebody reveals truths about them. Cockroaches don’t like sunlight.
UPDATE: These scumbags are hilarious. IKN hears from multiple sources that the lawyers representing CBW, Bennett Jones, have sent out letters to various people in the Canadian cap mkts community trying to scare them into shutting up and not divulging the truth about their worthless comapny. Bennett Jones obviously doesn’t know who is telling the truth about Cannabis Wheaton yet because they’re using a scattergun approach and mailing anyone and everyone they can find who might have said something about them. This is exactly the type of Modus Operandi used by scamsters and market bullies. For the record, IKN hasn’t received its mail yet but when it arrives, I’ll stick it up here on the blog for everyone to see. 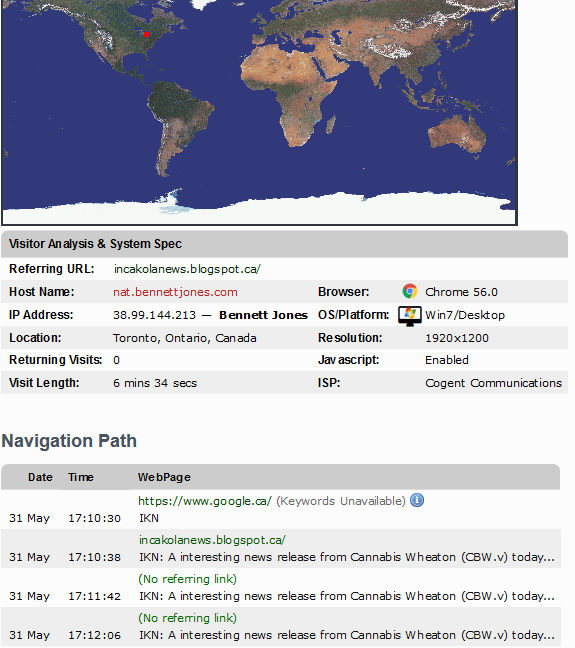 And a special hello to Steve Mantzouranis of Cannacord. Thanks for the tip-off, man.

*and my stars there’s competition