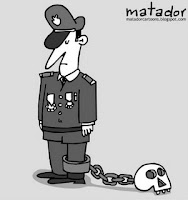 Ask Chileans, ask Argentines, ask Peruvians. They’ll all tell you that you can’t cover up large scale, state run human rights abuses, state terrorism, extrajudicial killings, torture, rape and all their cohorts forever. Sooner or later the word begins to get out. So add this communique from a working party of UK members of parliament and US/Canada/UK trade unionss to the 1,000 army personnel being investigated for ‘false positives’ and the 22,000 (yes, twenty-two thousand) cases of disappeared. And unlike their partners in torture and crime, these British MPs don’t mince words and directly imply Alvaro Uribe.

All in the name of freedom and democracy…….as usual.

We are a delegation of British Parliamentarians and British, American and Canadian trade unionists, and have spent seven days here in Colombia gathering information on human and labour rights abuses. We have met a wide range of individuals and groups across Colombian society, covering civil, political, legal and military interests, including trade unions, students and teachers, indigenous peoples, peasant farmers, trade union lawyers, human rights defenders, and former FARC hostages. We have travelled to Arauca province to hear the testimonials of communities and individuals caught up in the conflict in that part of the country. We visited Buon Pastor prison in Bogota and spoke to the women political prisoners incarcerated there; we also met with Martin Sandoval, imprisoned unjustly in Arauca. We had the opportunity in speaking also with senior members of Alvaro Uribe’s government and the President himself. We are grateful to all those individuals and groups who have generously given us their time.

We are shocked at what we have heard, and have no doubts on the evidence given that the Colombian government of Alvaro Uribe, and the security forces, are complicit in human rights crimes. We are convinced also that the murderous activities of the paramilitary forces are condoned and actively supported by the government and army. These crimes are aggravated by the impunity enjoyed by the perpetrators and the failure of the legal system to prosecute the criminals and those who issue the orders.

Instead of imprisoning the real criminals, the Government has locked up trade unionists, members of the political opposition and human rights defenders like Martin Sandoval. We call for his immediate release and that of other political prisoners and trade unionists.

On our return to the United Kingdom and North America we will be calling for: