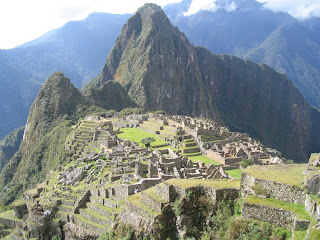 “Maybe next year, hey?”
(Click to enlarge by the way. Nice Hi-res)
Despite all that we have been led to believe by the delusionary Standard&Poors, still desperately trying to justify hiking Peru to “investment grade” last year, Peru has not diversified itself away from reliance on commodities. In 2008, metals such as copper, gold, zinc, etc accounted for 60% of the country’s total export revenue. Because of this, the country’s trade balance will certainly be negative in 2009. And if you take away the motor, the car stops running. No more construction boom, people. No more new cars sold. No more midweek treats at the new all-you-can-eat Chinese restaurant that just opened. Et cetera ad infinitum.

We’re already seeing the effects of this deficit. Yesterday the Central Bank (BCRP) sold U$213m dollars into the forex market to shore up the local currency, the Nuevo Sol. With Peru’s international currency reserves standing at U$32Bn at end 2008 it doesn’t take a mathematics professor to work out they won’t be able to do that kind of stunt too many times on the trot before people start asking “Hey? Where’s all that money gone?”, and the only answer the gov’t will have is “Err well, big businesses wanted to buy a lot of dollars so we had to sell them else watch the currency weaken.”

The idea of the currency safety net is to protect Peru and Peruvians, not the multinational mining companies that remit profits back to the USA, Canada, Australia, Switzerland and the UK, isn’t it?

Add to the mix the other sectors already under pressure. Asparagus, fresh fruits, fish meal (Peru is the world biggest in this sector and once again it’s nearly all foreign controlled) and last but not least in this quick role call, tourism. When gringos tighten their belts, The Sacred Valley of Cuzco suddenly becomes two weeks at the beach in a 3star.

Finally, let’s once again point out the lack of connection between GDP figures and bleedin’ reality. The same week that Peruvian mining companies lay off 5,561 workers the government insists the country is growing. Notice anything odd about that?