APEC moments you may have missed

Some Peruvian bizdude named Ricardo Rizo drew the short straw and was picked to introduce Bush and his speech to the APEC business forum yesterday. Our hero Dubya thought his intro would last a couple of lines and so after a few seconds bounded up on stage. But Rizo was determined to have his moment in the sun and while Bush stood onstage in the corner crossing and uncrossing his arms, shuffling feet and furrowing brow impatiently, Rizo warbled on though his full five minute uber-bootlicking intro. When it was finally over, Dubya took the mike, gave the fool a hard stare and mumbled “Gracias señor.”

While the heads of state pow-wowed over the “Lima Declaration” (a twelve point statement that says precisely nothing new) this morning, their husbands and wives were taken on a city tour of Lima. Here are some of the views that the bus sadly missed. 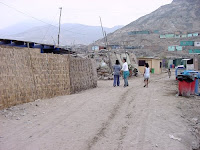 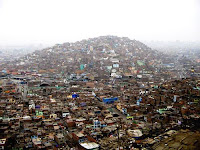 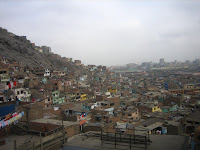 Strange that, innit? I mean, these views are typical in 95% of the city. How could they have missed all that?

The best moment of comic relief was provided by President Twobreakfasts (who else?) on Wednesday. At a luncheon speech to officially welcome the President of China, Alan decided to give his welcome speech in Mandarin Chinese. Although President Hu Jintao kept his face all solemn and dignified, the smirks and giggles coming from the Chinese entourage behind the two Prezzes caught everyone’s eye. It turns out that nobody….and I mean nobody…could understand a blind word of what Alan said (make that ‘try to say’) in Chinese. He was later praised for his “valiant effort”.

The food was obviously crap. Over 100 cases of upset stomachs have been registered so far among the 8,000 foreign delegates attending APEC. An official government press release attributes the attack of Atahualpa’s Revenge on (and I quote, because this is again from the “can’t make this shit up” files): “The weather in Lima is characterized at this time of year by midday heat, but cool breeezes in the mornings and afternoons. Because of this, some of the typical dishes that have fresh vegetables and fish as ingredients, such as cebiche, may cause upset stomachs more easily and provoke discomfort amongst unprepared diners.”

To add insult to injury in the stomach issue, reporters were forced to use a line of hastily assembled portaloos lined up at the side of the main conference hall. The smell after 48 hours was “interestingly profound”, according to one photographer that e-mailed Otto. Well, that’s my general translation of what he wrote in Spanish, anyway.