Applause for a Bush in Texas 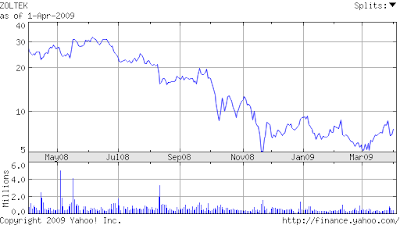 No, not that Bush family.

Stuart Bush is an analyst for RBC and based in Texas. He gets serious applause from IKN for having the cojones to call “sell” on a stock and being correct and staying correct over an extended period, all this in the face of plain vanilla bullying from the company.

Both this humble correspondent and the higher powers know what independent analysts go through when they have the temerity to say “that company sucks” in print. Even this corner of cyberspace has had to suffer foul-mouthed hatemail and wild, unsubstantiated accusations from company management (up to and including CEOs) and their blind sycophants (from retail shareholders to famous pundits and newsletter writers) who delude themselves about certain companies that have been mentioned here (regular readers can guess the rest). It must be even worse for an analyst such as Stuart Bush with a company salary and buyside clients who want to hear good things about potential investments, not bad things.

So hats off to Stuart. Here’s the first part of report in the Globe&Mail today and the link to keep reading. And thank you TM for passing the link on.

The analyst, the CEO, the schoolyard squabble

From Friday’s Globe and Mail

Stock analysts are often accused of being too cozy with the companies they cover. Then there’s the case of Stuart Bush, an analyst at Royal Bank of Canada’s investment arm in Texas, and Zsolt Rumy, chief executive officer of Zoltek Cos. Inc., a St. Louis-based maker of carbon fibre used in wind turbines.

The two have been battling each other for months. Mr. Rumy says Mr. Bush “has an axe to grind” and that one of his reports about Zoltek last summer was so negative that Mr. Rumy received death threats from shareholders. He has stopped talking to Mr. Bush and banned the analyst from company conference calls.

Mr. Bush, who has a “sell” recommendation on Zoltek, stands by his analysis and says Mr. Zoltek is just angry that the analyst’s industry sources are so good.

In it, Mr. Bush lowered his estimate for Zoltek’s profit, revenue and share price and questioned Mr. Rumy’s “overenthusiastic outlook.”

He also said the company’s head of sales had resigned over a disagreement with Mr. Rumy and he said several customers might cut purchases.