It’s deja vu all over again, as Appleton Exploration (AEX.v) throws sequins in the eyes of the market with another bullshit drilling result. You may recall last year, when AEX.v tried to make a one metre intersection at its Manalo project in Mali, W Africa sound like it was wide and something that it wasn’t. Here are two extracts we wrote on June 25th 2009:

So now we cut to June 15th, 2009. This because AEX.v published a NR that screamed it had hit an intersection of 192g/t Au (6.17 ounces of gold per tonne) over 10 metres at the Manalo site. The share price rocketed from the 20c-or-so level to 60c and beyond, even though the NR was “rather vaguely worded”….and that’s being generous.

The IKN post last year was more about the bullshit insider selling that was going on at AEX.v, but we covered the way the drill story finished, too:

And sure enough, when the NR hit the wires yesterday (June 24th 2009) to explain that the drill interception was less 10m at 192g/t and more one single metre that hit lucky on the same band that had been discovered previously the stock dropped like a stone.

….but when we check out the drillhole as reported, it turns out that AEX.v is intersecting the very same vein we knew existed before and smearing out the results.

Y’see, that “2.79 g/t over 31m” (do the math and the number 86.49 pops out) is mostly accounted for by the one metre of 57.3 g/t gold found between 106m and 107m at the bottom of that list, from the same vein that AEX tried to BS the market with last year (check that chart above to see what happened when the truth came out). Or if you like, AEX.v is telling us,

“We have this nice 57.3 g/t gold vein, but it’s skinny and it’s 350 feet underground. And then the 30 metres above that vein grades less than one gram per metre of gold on average. But hey….let’s throw them together and make it sound like thirty metres of sexiness. Freakin’ dumbass public ain’t gonna look further than the headline anyway.”

In the end we should thank this no-hope company and its bullshitting management for offering us such a clear example of the way drill results are spun out to try and fool us retail traders. This company is untouchable and its management team clearly unscrupulous, but it’s not the only junior explorer out there that tries to lipstick its pigs and pretends it might have a mine on its hands. DYODD, dude. 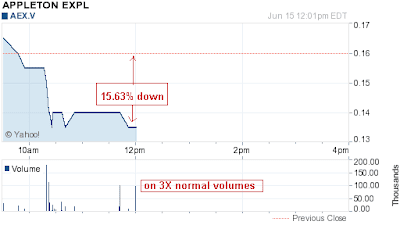 They even tried to pump-prime this bullshit at the bell and bid it up. Waddya say to the action in Appleton so far, owly?