Aquiline (AQI.to): No cash = No Control 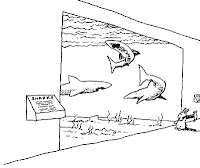 This time last week, Aquiline (AQI.to) announced a 40% rise in its resource (M+I) at its Navidad Silver/Lead/Zinc project in Argentina. All very nice and prospective for sure, and one fine day this resource will surely become one of the biggest silver mines out there, especially as the jungledrums are positive about the local Argentine bigwigs relaxing their mining ban in the region shortly.

So why has the stock sold off so sharply since then?

Answer: Got no cash.

At YE2008, AQI reported total assets of C$140m, but only C$8.5m of that was in the current asset column. Or in other words they’re short of readies and therefore at the mercy of the sharks-in-suits that populate the Toronto exchange. Those sharks know that AQI.to from here has two options….

…and as everyone’s most likely buyer of the project, Pan American Silver (PAAS) isn’t flush with cash itself right now and having its own (not desperate but significant) version of cash flow issues, the buying option has faded into the distance. For the time being, at least.

So what we’re witnessing right now is a bunch of sharks operating in cahoots. they want to push AQI.to stock down so that when the placement happens, it happens at a significant discount to the stock’s “true worth” (whatever that may mean…it still confuses me after all these years). The sharks want to scoop up as many cheapo shares as they can, y’see. It’s nothing more than attacking weakness..sharky is as sharky does.

Moral of the story: Junior miners are still suffering from the lack of credit available in the market, despite the bounce back from Oct/Nov’08 lows that we’ve seen. It’s still impotant for you, the retail investor, to make sure that any potential investment isn’t exposed to the whims of the Toronto crooks-in-suits. That means you want to buy companies with a decent cash position.