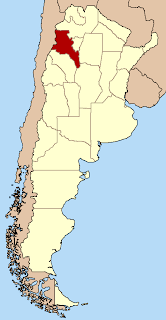 Argentina’s daily of record, La Nacion, is calling yesterday’s win by Lucía Corpacci as just that and who am I to argue?
Argentina’s politics is a veritable quagmire that’s difficult to escape once you’re sucked into it, but however hard it is to explain to outsiders, it’s the most fun possible for South American politikwatchers. So to events and putting yesterday into a nutshell, what happened was that Corpacci won the vote to be the next Governor of the province of Catamarca (up Northwest on your map of Argentina), winning out from the incumbent Governor Eduardo Brizuela del Moral.
So, provincial election in way-out-that-waysville and what’s the big deal Otto? The big deal is that Corpacci is a staunch Kirchnerite and this vote was seen by one and all as the first real test of Cristina’s candidacy strength in the upcoming October 2011 Presidentials. Catamarca yesterday was a sort of New Hampshire Primary, if you like. Not the same because Cristina wasn’t up on the ballot explicitly, but be in no doubt that Catamarca knew exactly who they were really voting for by making Corpacci their new Governor.
As thus, let Cristina’s opposition tremble even more. She’s already way out ahead in the polls and this weekend is yet another strong sign that re-election is the way of 2011. And she hasn’t even officially thrown her hat into the ring yet, either.