Argentina and the IMF: Just say no to drugs 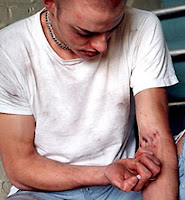 The big economy news in Argentina this week…..

The big economy news in Latin America this week has been the talks between Argentina’s economy team and the International Monetary Fund (IMF). Firstly, last week we had headline like this…

Argentine Bonds Gain as Country To Renew IMF Talks, Swap Debt
…from Bloomberg on the 20th. Then yesterday when the talks actually happened we had this….
Argentina Econ Min: ‘Positive’ Meeting With IMF Official
…from the WSJ. Then suddenly today the tone has changed, with Argentina’s new FinMin Boudou saying that…
“The government is not asking the IMF for anything”
…and that the country wouldn’t allow conditions to be imposed upon it by the IMF lackeys. If that’s true it will be a great weight off everybody’s mind down this neck of the woods. Argentina may be one kooky country when it comes to finances and the Kirchner regime is going from bad to worse right now, but one of the better moves in its history happened when Neshtor&Co paid off the IMF debt and kicked them out of the country, slamming the door behind them. In the words of the Ex-Prez in 2005;

“There is life after the IMF, and it’s a very good life…..being in the embrace of the IMF isn’t exactly like being in heaven.”

After what Argentina went through in the late 1990’s under the IMF straightjacket which sent them tumbling over the cliff in late 2001, no country in the world knows better about the IMF’s hidden agenda. So rather than wax any further lyrical, let’s leave it to ‘Larry’ of the esteemed Argentine economics blog ‘los tres chiflados’ to tell you what professional, experienced, qualified and intelligent economists in Argentina think of the IMF. The following is the first part from the L3C blog today, well said indeed, Larry.

The IMF has never looked after the interests of Latin America, it is simply another tool used by the USA for its foreign policy. The IMF finances in exchange for structural economic changes that only favour US economic interests: Open the economy, privatize, make government smaller, don’t intervene in the economy (or in its negotiations), liberalize capital flows, don’t intervene in the forex market, no trade barriers, no tariffs, liberalize the labour market (restrict rights), don’t use generic drugs (so royalties are paid), more laws to cover patents etc etc. We already know the consequences.

To ask the IMF for money is to give in the the temptation of the carrot, is to be under the illusion, is to not recognize the power of the USA in the world, is to be naive about history………