Argentina: Another round of “INDEC versus Reality” 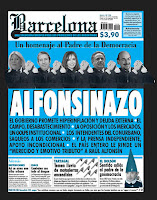 Just for fun, today’s wonderful front cover of Barcelona
(click to enlarge)
When the Argentine government’s official stats office INDEC announced last week that industrial output had dropped just 1.1% in February compared to the same month last last, the laughter could be heard on the other side of the Rio de la Plata. Long gone are the days of anger, of protesting the INDEC, of indignant op-eds in newspapers, of marches and symbolic demostrations outside its offices. Nowadays Argentines just react with a shoulder shrug and a giggle and just wait for the more reliable independent economy bureaux to tell them how it really is.

Here below is something far closer to reality (and of course the gov’t throws up its hands in disgust and denies it all). Argentina’s industrial output dropped 12.1% in Feb ’09 YoY. DJNW takes up the story.

BUENOS AIRES (Dow Jones)–Industrial production in Argentina declined far more in February than the government previously reported through the national statistics institute, Indec, according to a new report published by a manufacturers group.

But February’s output actually fell by 12.2%, according to the Argentine Industrial Union, a group that represents the country’s leading manufacturers.

Dow Jones Newswires obtained a copy of the report Wednesday.

The UIA’s report is considered authoritative because it gets its production data from its own member companies, which in many cases are the same companies consulted by Indec. In theory, economists say, Indec’s data shouldn’t differ substantially from that compiled by the UIA itself.

In reality, the gap between Indec data and private-sector industrial estimates has widened in recent months.

“If the decline were of that magnitude, we would be seeing job losses that, thank God, we’re not seeing,” Giorgi said. “This isn’t Argentina’s reality. All you have to do is walk around and look at factories in the country.”

The UIA’s report indicates industrial production is down for the fourth consecutive month since November. Before that, production had risen uninterrupted for 72 months.

A UIA official familiar with Indec’s report says the government institute gets its data directly from companies and not from the UIA itself. But the official didn’t know how many of these companies Indec surveys.

Indec officials repeatedly decline to comment on differences between their reports and private estimates.

One example of diverging data comes from the estimate for food and drink output. Indec reported that February food and drink production rose 13.3% from a year earlier while the UIA said it declined 5.6%.