I don’t normally excerpt the weekend’s edition of The IKN Weekly twice, but in this case I’ll make an exception as this piece has been requested on the open blog by A. Mailer for their own reasons (that are fair enough). So here you go.

Argentina: Beware inflation (again)
The message
about Argentina here at The IKN Weekly has been consistent: Yes there is new
interest about the country since Macri took over, but fools rush in where
angels fear to tread and the reforms he wants to push through have no guarantee
of success.
We’ve also
been pointing at the key datapoint you need to follow for almost a year, long
before it got popular in the trade press. Macri needs to lower inflation and he
and his team have always set “the second half of 2016” as their target for
this. The reason is simple enough: Under Cristina Fernández de Kirchner
inflation was always high, but large percentage pay increases saw the
purchasing power of the average Argentine keep pace with prices. This isn’t a
sustainable situation in the long-term and leads to real hyperinflation
problems (see Venezuela), but it can keep things stable in the medium-term and
nearly always longer than orthodox economists claim. But under Macri salary
rises have been largely crimped, so inflation needs to come down quickly
because if not, Argentina suddenly becomes poor in Peso terms (which is what
counts when you’re in the supermarket).
That’s the
VERY basic outline, now for the rub because doubts are now arising about this
fight against inflation, here are a couple of links for your consideration.
Here in
this Reuters report (14) last week, the local bigwig for JP Morgan, Facundo Gómez
Minujin, said the following (translated):
“For this year we see
inflation at 42% and then for next year 21%. And it’s difficult to change that
trend. It’s difficult to lower inflation by much, especially next year when
there are elections”.
By that, he’s referring to the
round of Congressional mid-term elections when a lot of the seats in the national
parliament are up for grabs. This will be the first big test of the results of
the Macri government policies. The assumption is that the hardline macro/fiscal
policy will have to be softened for a period and more populist policies offered
to give the Macri government a chance of doing well. I needn’t tell this
audience of the potential dangers being baked into the pie. As a sidebar, it’s
also easy to argue that “21% for 2017” is rather optimistic as well,
rose-tinted specs from someone who wants Macri to do well.
Meanwhile this article in The
Economist (15) last week suggested that the Macri honeymoon period is coming to
an end and also focussed on the price inflation/salary see-saw as key. Here’s
an excerpt from the piece, plus one of its visuals:
Mr Macri has reservoirs of
political strength and popular goodwill to draw on. Though Argentines are
angry, most still blame the Kirchners for their hardship. Allegations of
corruption have enfeebled Ms Fernández as a political force. A new generation
of politicians is competing to become the next presidential candidate of her
Peronist party, weakening its ability to provide opposition to the government.
But Mr Macri’s honeymoon
is coming to an end (see chart). With legislative elections due in October
2017, “the government needs to show some economic results in the first quarter
of next year,” argues Juan Cruz Díaz of Cefeidas Group, an advisory firm. The
IMF thinks the economy will rebound in 2017; it forecasts growth of 2.8%. 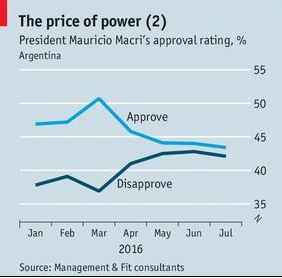 My only argument with the above is
this line, “Though Argentines are angry,
most still blame the Kirchners for their hardship”, because “most” is way
too strong and “some” is a more accurate image (please recall the decade-long
hatred The Economist showed for the Kirchnerist governments, they’re anything
but unbiased). It’s also notable how political commentators (largely
sympathetic to the Macri cause) are starting to shift the time window to “the
first quarter of 2017”, even though Macri ran and won his election of “second
half of 2016” as the critical period when the sacrifices he demanded of
Argentines would start to bear fruits. Add in this CEOP poll that shows 7 out
of10 Argentines unhappy with their personal economy and opposition popularity
at 47% versus Macri government popularity down to 33% (15a) and the scene is
set for the big fight to come. Argentina the political beast has always been
sensitive to its economic well-being, so if Macri does turn things around in
the next two quarters we may be witnessing the low point of his acceptance
ratings. If he doesn’t I can guarantee this audience, as day follows night,
they’re going to get a lot worse.
The bottom line: The song remains
the same, be very careful of Argentina exposure, ladies and gentlemen. Yes
there are opportunities there, in our focus sector of mining and others, but
the risks are much higher than the promoters of the country and its concession
land would have you believe. Take for example one scenario in which we see
large-scale protests building in the first and second quarters of 2017, then
the CFK end of the political spectrum doing well in the 2017 mid-terms and
wresting control (total or partial) away from Macri in congress. Attitudes
towards the country would quickly return to “Ah well, they’ve been FUBAR forever
anyway, at least we serious people tried…” and the FDI that Macri needs to complete
his economic turnaround won’t happen and that statement very much includes
those mining projects we all like to talk about.
As I put it to one person last
week, a historic window of opportunity tends to come around in Argentina mining
from cycle to cycle and that window is right now…for people wanting to sell.
Be it land, projects or concessions, you get interest from opportunistic buyers
and that grows into a fully-fledged seller’s market. People owning mining
assets in Argentina have the chance to book safe profits on previous
investments right here right now in 2016. But the issue is 2017, because if
they hold on to their land assets for a while longer those profits might be
even higher next year, Macri starts turning Argentina around meaningfully and
the buying interest becomes a feeding frenzy. But if things go wrong next year,
the window will suddenly slam shut as it’s done so many times before.
Risk/reward is favourable today, but could go badly out of balance in the near
future.