Argentina: the fatter the better 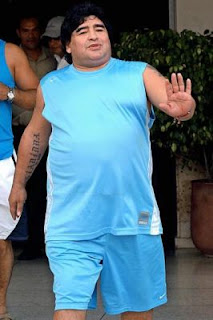 Maradona, patriotic citizen
First it was Lula in December exhorting his fellow countrymen to keep spending and save the economy. Then no less a bunch of idiots as Goldman Sachs said that “BRIC shoppers will rescue the world”. Now it’s Argentina’s turn to jump on the silliest of all ‘beat the recession’ arguments. 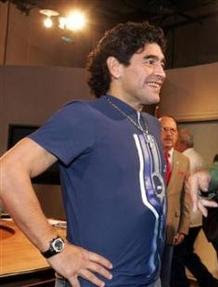 Maradona, traitor to his homeland
Today Klishtina’s Kabinet Chief Sergio Massa urged his people ever onward and upward in the struggle to spend money. Massa asked his fellow boludos “to consume to allow the Argentine economy to maintain its virtuous circle” while at the same time asking for “rationality” with the upcoming round of 2009 salary negotiations. He continued with, “Let the people consume and let the businessman keep generating products that the market consumes.”

So interestingly, this means by logical conclusion that rampant inflation is good for Argentina as it will make sure people keep spending their Pesos as soon as the monthly paycheck arrives. It takes an Argentine economist to point out where the rest of the world has been going wrong all this time, doesn’t it?

It also means that fat bastards should eat as much as possible, which will go down well in the only country I know where joggers smoke and eat hotdogs at the same time as running (and if you’ve seen a dozen porteños attack a parrillada you know just how impressive their capabilities are in the eating sphere when they actually sit down and get serious). It also has the side effect of keeping heart surgeons and undertakers in business, but let’s not dwell on that.