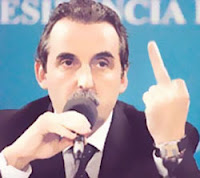 Guillermo Moreno (for it is he)
In a meeting in Argentina between two groups on September 14th, the head of one of the delegations said to the people on the other side of the negotiation:

“Outside I have my boys, experts in breaking backs and extracting eyes from those who talk*.”

A scene from Goodfellas? Cocaine mafia, perhaps? Nope, that was Guillermo Moreno, the Minister of Interior Commerce and close ally to the leader of the country (and his wife, for that matter) talking to the delegation of media bosses about how he’d treat anyone who talked out of turn about the new media law.

The media group Clarín, in an ongoing spat with the Kirchnerist government, and currently fighting the passage of the new, controversial media law through congress (with the help of opposition friends) has now formally denounced Moreno on criminal charges. This chapter will be a lot of fun.

I did mention that Argentina is not a serious country, didn’t it?