Artisan Miners on strike in Peru 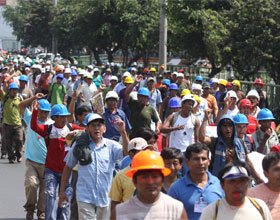 The scene in Lima a few minutes ago
Today in Peru, so-called ‘artisan miners’ started a 72 hour strike this morning to demand the overturning of a Presidential decree that, acording to them, refuses to recognize the rights of the smaller miner. What they’re after is to be recognized and registered in the same way as the formal mining sector of the country. This will, in turn, allow them access to the international markets for their production and break their reliance on middle-men such as informal clearing houses and registered mining companies that buy up their production at a discount to world prices.

That doesn’t sound like a big deal, but when you consider that artisanal mining has an estimated workforce of 300,000 people in the country and that the sector is estimated to produce 24 tonnes of gold per year (as well as all the other metals and non metallic mining production too) that’s a sizeable sector of the country’s workforce.

And another thing about artisan miners is that you don’t wanna mess with these guys. The protest started today by blocking the main Panamericana highway at Nazca, South of Lima. According to reports, no vehicles are getting through and this has caused full-blooded chaos on Peru’s main southern trunk road with tailbacks are already of the “I can see this on Google Earth” variety. The roadblock is clearly illegal and Interior Minister Cabanillas is already threatening to send the police in to break it up. I hope tempers cool on both sides, because if not it could all get rather nasty. Like I say, these are a hard bunch of guys. The next phase of the strike is starting about now, as a large body of the artisanal miners is now marching towards Congress in Lima in protest (see photo above).