As bad banks seem all the rage….. 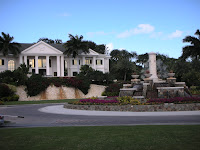 That’s a nice looking bank
……..you should be very interested in this story.

Over at The Devil’s Excrement, for once there’s a post that doesn’t mention the guy’s hatred of Chávez and proves he can write about other things; it’s well worth a view.

It seems like Alex Dalmady of respected firm Veneconomia may have stumbled across a bank in Antigua with $8.5Bn (yep billion with a “B”) of rather…well how do you say this without causing too much of a stir?….errr……well Dalmady uses words like “Madoff” and “Enron” in his report and clearly implies that the Stanford International Bank is not all it makes itself out to be.

On prompting from a mailer who said “hey, look at this!” I read the Devil Excrement post last nght and then went over to the Veneconomia article and read it through….then read it through again. Then I really stopped what I was doing and pulled the Stanford filings (scant as they are, the online versions) and looked again. The fact that the bank has missed two relatively small recent payments while supposedly boasting a large liquid asset base is rather strange, and that’s just one piece in a very large puzzle.

Now you be the judge.