Yesterday morning this humble corner of cyberspace received a mails from one Rob Slater, the “Executive Coporate (sic) Development & Strategy” person at Asanko Gold (AKG), which demanded “an immediate public correction” of the post published by IKN last Friday that stated Asanko had once again (i.e. these people are serial offenders) given special tip-off information to a select group of sellside anal ysts at a recent breakfast meeting. Sorry Rob, you can stick your correction where the sun doesn’t shine because either a) you are not aware of the meeting in question which did in fact take place b) you are deliberately trying to confuse it with a meeting that was declared by the company or c) you are lying.
This blog has previously and will happily provide in the future correction when information published turns out to be incorrect, but in this case there is no retraction at all, not a single intercoursing word. For further thoughts on this matter, Rob Slater coporate executive (see screenshot below), we refer you to the reply given in the case of Arkell v. Pressdram. 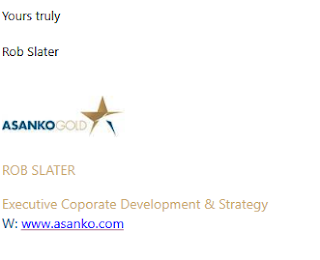