On July 15th Atna Resources (ATN.to) came out with a big rah-rah NR on the “75% improvement” at its woeful moneypit which goes by the name of Pinson. If you check out the NR you get to see the wonderful thrusting upwardness of it all, with the arrow that goes swooOP!… 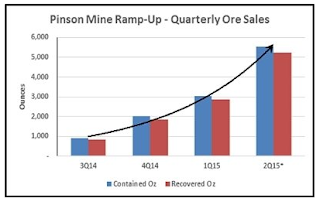 …and oh how we love them. It even got a few suckers to buy the darned thing:

Today we got their quarterly numbers and things aren’t quite as swoopily wonderful. To start with that chart above that shows the Pinson mine at over 5,000 oz of recovered ounces? Only 3,604 ounces were payable. But if you start searching round the MD&A things get even funnier, there are some absolute pearls to be found. Such as this:

Here’s an idea of the cash they’re generating. Forget cockamamey “operating cash flows” and look at the real numbers that are accounting standards, such as operating earnings…

…or even gross profits:

Can somebody please tell me how you’re supposed to pay down a $22m facility from Waterton (of all freekin’ people!) due in January 2016 when your operations make negative gross profit?

There are other beauties in the MD&A too such as this one:

But it’s when you get to the balance sheet that the reality of Atna Resources (ATN.to) moves from ugly to something far more nefarious. Remember that $22m they need to pay back in less than six months’ time? Here’s the cash treasury position:

Those two representative of many other charts I could bore you with today. With all of them, the song remains the same.

Amazingly, there are still idiots who in 2015 have been recommending this company’s shares to people, saying that it’s cheap and stuff. With that in mind I’m going to put the next bit in bold type, just to make sure it catches your eye at the late stage of a long-ish post:

You may think 7.5c, or even ATN’s recent 10c or 11c level, is a cheap price for a share price of a producing and operating gold mining company. Believe me, it’s about to get a lot, lot cheaper because once Waterton’s done with ATN this equity is going to be smashed into tiny little pieces.

Do yourself a favour, ladies and gentlemen of the retail investment community, make note of the names of the people who’ve been pumping this utter junk at you and remember never to listen to anything they have to say about investment ever again. “Stop The Stupid” applies to your own trades, it also means that these blithering idiots need to be weeded out of the mine chattering class as soon as humanly possible.