Your humble scribe notes this morning that both Can of Corn (in its Morning Coffee daily mailer) and Scotia (in its Mining Scoop daily mailer) are giving AuRico Gold (AUQ) (AUQ.to) da pump, largely based on the roadshow they witnessed last week and how wonderfully shiny and happy the company is nowadays. Jeesh, people, that all you got there days? Dragging out that tired old meal and re-heating it (new toppings and sauces to make it tastier) instead of actually going out and finding a company worth mentioning to your respective flocks?
The problem with AUQ is pretty simple: It’s historically one of the worst managed gold companies out there and that doesn’t change just by changing its name (as it did last year) from Gammon Gold to AuRico (which is a freakin’ stupid name, by the way) then overpaying for the Young-Davidson property and then finally pinning all hopes on its development when management has a long track record of snatching defeat from the jaws of victory at its other mines. I mean seriously, check this out: 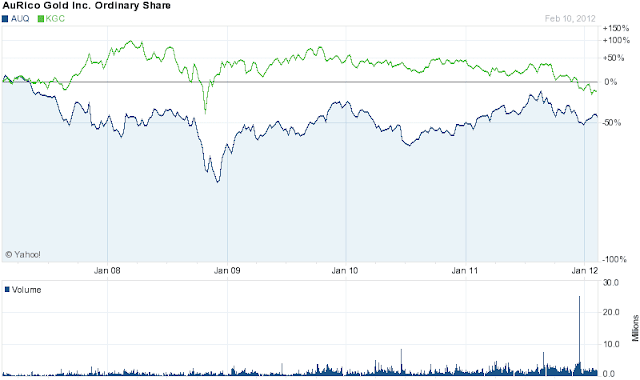 AUQ is so mediocre it make Kinross (K.to) (KGC) look like a decently performing company. Gammon/AUQ’s chequered past includes way higher than expected cash costs, production forecasts that hardly ever hit the mark when reality rears its ugly head, long term strike actions at its mines and reserve/resource counts that have to be adjusted downwards at a later date because they were eventually found to be full of so much brown fecal matter. And suddenly you’re pinning buy on the thing because you believe its roadshow, full of forward looking statements, without even bothering to doubt management’s word? Lemme guess….you did a financing for them at some point, right?

“This is also a Casey pump job for their Big Gold (another stupid name) subbers. It is a “buy, 2nd tranche” right now which means it has fallen substantially below the buy 1st tranch level. Go figure.”