At what point do the insider sales at B2Gold (BTO.to) go from merely impressive to “Ok, so why are the insider so darned keen on cashing out right now, what do they know that we don’t?“? That’s what passed through your humble scribe’s tiny mind this morning on noting yet more selling by insiders yesterday, this time George Johnson, Sr VP Ops, so it seemed a good time to tot up just how many shares had been dumped by these people onto the open market recent. Here’s the table with the goods: 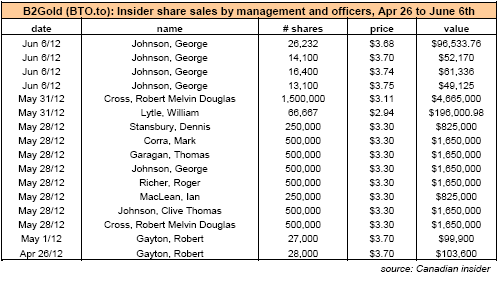 For the record, that little lot comes to:
Now I dunno ’bout you but that seems quite chunky to me, especially when seriously key people such as company chair Robert Cross dumps over $6.3m of the total. Now maybe BTO people think they’re worth it and deserve the winnings, but it still doesn’t explain why BTO staff seem to be looking around on the internet for reactions to their payola. That suggests something else entirely.
dyodd