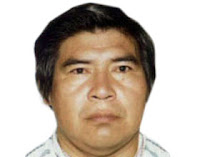 Santiago Manuin was shot to death by Peru police yesterday at Bagua. President of the Condorcanqui Amazon defence group, he won the Queen Sofi a of Spain award for his work in defending the environment of the Amazon Basin. The kind of person that Twobreakfasts calls “not a first class citizen”. UPDATE Sunday evening: Well, that Mark twain quote is apt, I’m glad to say. Manuin is still alive but in a bad state, having taken eight police bullets and several emergency operations. Man of steel, it seems. ¡Que te recuperes, Santi!
This is the link to a Google News page in English filtered for English language news on Bagua and the repercussions. You’ll get all the latest stories from Reuters, AP, AFP, NYT etc on it. Better than me trying to update the story constantly.

Peruanista has a slideshow of photos that are not for the faint of stomach.

Simon Rosemary makes me vomit by quoting the racist Aldo Mariategui of Correo who links the protestors at Bagua to Hugo Chávez. Seriously you dickhead, how low can you go?

Finally, site friend Amazilia (via a Mexfiles translation) hits the nail on the head with this observation in the post “Peruvian Failure”. Very well said, Amazilia

Once again Peruvian society has failed. The death of Peruvian citizens in confrontations that could have been avoided is a symptom of our failure. Moreover, the indifference and even the justification by many commentators and bloggers, who are able to accept these deaths as necessary to maintain order and development means that we are still very far from being a country that can progress.

Well I thought that was “finally, but this is important. Comercio is reporting that of the 38 police officers taken hostage last night, 22 have escaped/were rescued, nine have been killed and the rest are missing.