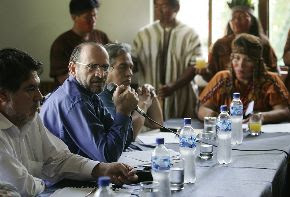 Yehude Simon at today’s meeting
Peru’s PM Yehude Simon met today with representatives of the Amazon indigenous peoples and, not to put too fine a point on it, told them what they wanted to hear:

Look, so far it’s word and not deeds, and simply because the executive presents a plan to annul a law it doesn’t mean that Congress will go through with the plan, but let’s give Simon and the Peru gov’t the benefit of the doubt for the moment and regard today as a big step towards a resolution and an enormous climbdown on the part of the Twobreakfasts government. As Churchill said, jaw jaw is better than war war…..a thousand times better, in fact. Here’s how Peru state news agency Andina reported the meeting (first couple of paragraphs translated, find the rest here):

The executive subscribed this afternoon to a 12-point act of understanding with native communities of the central jungle, in which it committed to present before Congress before June 18th a proposal to overturn the legaslative decress 1090 and 1064.

After a four hour meeting between Simon and the “Apus” of 390 indigenous communities in the town of San Ramón, they also agreed that the other questioned decrees should be discussed in the National Coordination Group for the Development of Amazonian Peoples that will begin tomorrow.

To begin this Group, representatives will travel to Lima from the central jungle region to join a multisectoral working commission, guaranteeing the participation of AIDESEP and other native groups.