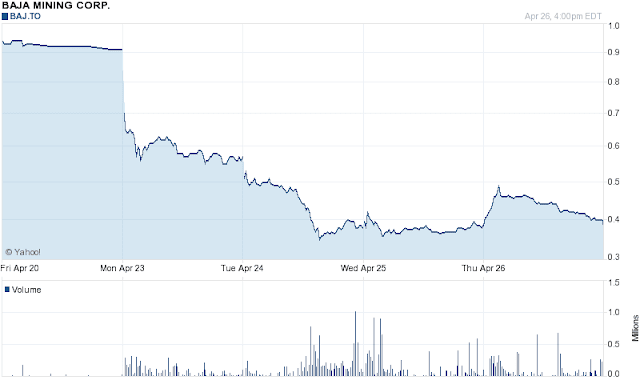 Less than an hour ago we got the following from Mount Kellett, near 20% owners of BAJ.to stock and the guys who were narrowly defeated in the recent proxy battle.
What happens now? The most likely course of least resistance is that Greenslade is dumped, Mt K (which has been shorting the stock) gets the major lump of the upcoming dilutive share offering and then eventually (after a corporate wheel and deal or two) takes full control of the company. And then gets its turn to be flushed down the tubes by Boleo. Avoid this stock, folks. That’s a call that hasn’t changed since IKN142 back in January (we get ’em right on occasion, y’see)

VANCOUVER, British Columbia–(BUSINESS WIRE)–
Mount Kellett Capital Management LP (“Mount Kellett”) today filed an amended Schedule 13D with the Securities and Exchange Commission and provided comment on the recent announcements by Baja Mining Corp. (TSX: BAJ.TO – News) (OTCQX: BAJFF.PK – News) (“Baja”) concerning both the projected $246 million cost overrun for the Company’s Boleo project (or a total of $438 million after exhausting existing contingency and cost overrun facilities of $192 million) and the resignation of four of the Company’s seven directors a mere three weeks following the Company’s April 3, 2012 special meeting of shareholders.
“We demand the immediate public release of the ICA Fluor report and related materials on cost overruns at the Boleo project. It is critical that all shareholders better understand the predicament that Baja faces to make an informed judgment on their investment.
“In addition, John Greenslade should immediately resign as a director and officer of Baja. Due to his actions a tremendous amount of shareholder value has been destroyed. Mr. Greenslade has operated the company as a personal fiefdom with no regard for proper disclosure or good governance and the huge decline in the Company’s stock price is a consequence. Having lost the support, and received the resignations, of six independent directors in just the last twelve months, it is undeniable that shareholders require immediate and credible management of their company.
“We also call for the immediate reconstitution of the Board of Directors to include Messrs. Lorie Waisberg and Stephen Lehner, the two independent director candidates previously nominated by Mount Kellett, and to add two experienced independent directors satisfactory to Mount Kellett and other significant shareholders. This action is imperative as we believe that the remaining members of the board, or any directors that may be appointed to the board by Mr. Greenslade to fill current vacancies, will be too conflicted to make the critical decisions that will be required to be made on behalf of shareholders in the coming weeks. We believe that shareholders are at substantial risk that the current Board may pursue transactions that are highly dilutive to shareholders or that are not in the shareholders long-term, best interests.
“Even with the recent devastating news, we believe that the Boleo project represents substantial value for all Baja shareholders. We are prepared to protect our investment, and the investments of all current shareholders, by providing financial support to Baja, either alone or in conjunction with other investors, following standard due diligence. To date, Mr. Greenslade has denied our efforts to assist the company and enter into due diligence and negotiations despite the urgency of the situation.
“Shareholders are the true owners of Baja and it’s time to put aside the defence of management and renew a focus on governance and the execution of fiduciary duties on behalf of shareholders needed to save this company and its valuable copper project. Mount Kellett is prepared to take all such actions that may be necessary to protect its interests and those of its fellow shareholders.”