The rich rule over the poor, and the borrower is slave to the lender.
Proverbs 22:7 (New Intl Version)

Do not be one who shakes hands in pledge or puts up security for debts;
if you lack the means to pay, your very bed will be snatched from under you
Proverbs 22: 26/27 (New Intl Version)
I nearly had a rant in the Weekly yesterday about balance sheets, but in the end decided against it because I’ve already bored that smaller audience to death on the subject after several similar pieces so they deserve a break. But it’s still bugging me today Monday, so a couple of words to get it off my chest here instead. It’s been eating at me ever since that Bank Island Gold (BOZ.v) thing last week, with the post I threw together once I’d seen how horrid the thing was underneath the blahblah and Lobito pump nonsense. That post on this link and by way of reminder here’s the latest balance sheet as seen there. 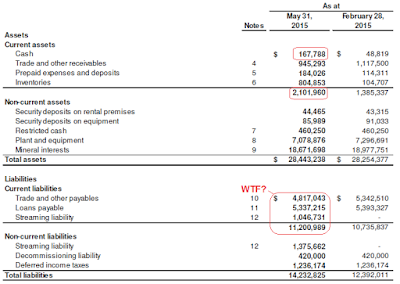 I didn’t scribble much on it, but could have done and maybe that’s why the subject still sticks in the craw today.
Here’s the thing—-> In the end screw Louis James, he doesn’t matter and I don’t care what thinks says or does, what matters here is that retail share investing people who are still putting (or at least thinking about putting) their hard-earned cash into juniors stop blindly betting on stories and start looking at a company’s financial position. Here and now today, with money tight and junior shares cheap because the companies have gone into lock-down mode, there are potential deep bargains to pick up but do yourselves a collective favour and don’t fall for a company with weak debt positions.
Or bluntly, LOOK AT THE FREAKIN’ BALANCE SHEET, PEOPLE! That’s all I really want to say, because if you don’t and you decide to buy into one of these tale-to-tell stocks like Banks Island Gold (BOZ.v), it’s the type of basic error that could wipe out all your cash. Look, if you want to risk some shekels on a longshot that’s fine, but please pick one that’s not in imminent danger of collapsing in on itself financially. Look at the balance sheet and before you start caring, check its liabilities. If there’s true financial debt staring back at you (like that one above) and little in the way of current assets to offset the burden, consider it a big fat red flag.
There are a lot of cheap juniors out there. So if you’re going to play them don’t just choose the ones with the massive potential upside, get smart and choose the ones with the massive upside and the likelihood that they’ll still be alive and kicking in a year’s or two years’ time if the anticipated rebound doesn’t come in your preferred timescale.

PS: Match the post with music, they said. So I did: