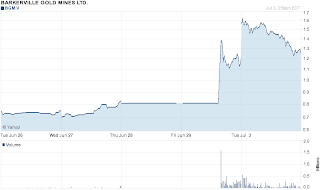 Let’s just visualize what this deposit would have to look
like on the ground. It is an order of magnitude richer per cubic meter
than the Timmins Camp in Ontario. To support such a resource, the 1,000
by 300 by 300-meter block of ground at Barkerville’s Cow Mountain would
have to host approximately 39 kilometers of Mother Lode type veins, at a
density of one 2-meter wide vein spaced every 7.6 meters. This assumes
each and every vein is consistently grading 5.28 grams per tonne gold
along a 300 meter strike and 300 meter depth. Got it?

As a geologist, I will steer away from commenting on some corporate
anomalies at Barkerville such as the recent resignation of a couple and
the very short tenure (45 days) of a CEO appointed in early March.

I
do not have the luxury of having the final NI43-101 report supporting
this resource in hand, so my initial review comes from the June 29, 2012
news release and other publically available information from the
company’s website and SEDAR. Having reviewed these over the weekend, I
would like to address several technical red flags I see around the
reported resource at Cow Mountain.

2) All of the
resource at Cow Mountain is classified as indicated and none is
classified as inferred. It is exceptional to see a resource, especially
one of this magnitude, display this high of certainty.
3) The news
release mentions that if a block falls within the search ellipse of one
drill hole, it is classified as “ore.” Most resource calculations
require more stringent criteria for resource blocks to be classified as
indicated.
4) From a drill plan map available on Barkerville’s
website, I calculate there have been 238 surface drill holes completed
at Cow Mountain between 2007 and 2011. In the news release, there is a
mention of 2,638 drill holes totaling 145,600 meters, mostly historic,
used for calculating this resource. Although results from 2007-2011
drill holes are available in recent news releases and the NI43-101
update report from 2009, data from the vast number of historic holes is
not readily available. This lack of transparency is disturbing.
5)
There are all of seven cross sections showing drill intercepts on the
company’s website. Text displayed on these sections is painfully hard to
read due to the very small font size used. Gold intercepts on these
sections as well as in recent news releases are mostly narrow, typically
no more than a few meters, and of highly variable grades ranging from
less than one gram per tonne gold up to rare intercept grading >100
grams per tonne gold. On the sections, no attempt has been made to
connect veins from one drill hole to the next. A full set of cross
sections like those described as having been employed by the resource
modeler in the news release are not available on Barkerville’s website.
This makes a critique of the news release’s assertions nearly
impossible.
6) A review of recent news releases indicates some drill
holes have occasionally intersect narrow, very high grade veins.
Mesothermal lode gold systems such as Cariboo commonly display such
“nuggety” gold. What is disturbing is that the company has employed
extreme grade smearing utilizing these high grade spikes. For example,
on December 12, 2011, the company reported an intercept of 62.3 meters
at 14.2 grams per tonne gold in hole CM11-102. Within this are two
intervals (veins), 0.9 meters at 858.1 grams per tonne gold and 0.7
meters at 84.6 grams per tonne gold. I calculate these smaller
intercepts contribute 95% of the gold to the longer intercept, yet
represent only 2.5% of its length. Although these high grade intercepts
are intriguing, one look at the cross section displaying this hole
indicates they do not extend to other nearby holes. Therefore, it is
likely these represent small volumes of material, certainly not the
large high grade zone implied by the longer reported intercept.
7)
Reporting “geological potential” is highly unconventional, but it is
done very liberally in this news release. The QP asserts that the
Island-Cow-Barkerville belt potentially hosts 405-684 million tons at
0.12-0.16 oz per ton for 65-90 million oz gold. The Rainbow unit of the
Barkerville sequence is stated as being the preferential host to veins
at Cariboo due to its brittle nature. The news release implies that the
resource modeler used this observation to make certain assumptions about
volumes of rock, vein density, etc. to help calculate this potential.
While such theoretical exercises are entertaining, they are highly
speculative and have no place in a news release.

The seven red
flags I have presented here are hopefully enough to provide you a taste
of my initial review of Barkerville’s resource. This story comes at an
interesting time given the current doldrums in the market. I’d urge
subscribers to give the observations above some thought and undertake
your own due diligence before jumping into this stock.


We have now beaten this one up sufficiently. It is up to Peter T.
George, the resource modeler contracted by Barkerville, to, in his upcoming NI
43-101 report, fully illuminate investors on the methodology he employed
to calculate this astounding resource. Like Brent, I shall be
preparing a cold gin and tonic about 45 days from now in preparation.

UPDATE: Good comments being left below this post. Particular agreement with anon at 9:52pm. Also, thanks to one comment I’ve recently corrected my bad spelling of Quinton Hennigh’s name. Thanks for the nudge, appreciated.

UPDATE 2: Brent Cook weighs in, via an interview with Northern Miner.I like the bit where he references Bre-X