Barrick and Pascua Lama: Munk and Borg’s lobbying pays off 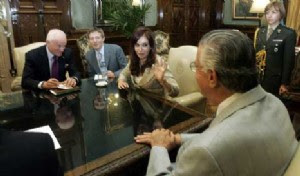 photo source
In the last couple of weeks, both Argentine and Chilean press reported that Peter Munk and Vince Borg of Barrick (ABX) met with the countries’ respective presidents (Klishtina and Michelle) to try and get the company’s massive but expensive and environmentally complicated Pascua Lama gold project moving.

The sticking point of the project that straddles both countries high up in the Andes has been the tax regime, but it seems that the three parties have come to a broadstroke agreement. Here’s Reuters with the info:

Chile’s tax authority said the tax issues were agreed upon at a meeting in Buenos Aires on Tuesday.

“During the meeting, a deal was reached to resolve tax issues related to transborder services and some others that remained outstanding,” Chile’s tax authority said in a statement.

1) Enviro protesters ramping up their voices in opposition. To be honest they have a case, here. Details can be found all over the interwebnetpipes via that Google thingy, but I’d strongly suggest you read both sides of the argument and not swallow either sides’ propaganda whole.

2) Argentina and Chile will likely get bogged down in the unspecified details, as this saga has been going on all decade and there’s no reason to suspect that today’s announcement declares a final definitive accord. LatAm is as LatAm does and you’d be wise to remember that.

3) Barrick will do the pipes and whistles on the news in the next few days.

That’s just three personal ideas and there will be a lot more thrown into the mix, for sure. My personal bottom line on this is witout particular opinion, but I’m a keen observer of the issue and will be watching the developments going forward. However for those looking for an investemnt angle on this news, take a good look at International Royalty Corp (IRC.to) (ROY) as it has a chunk of the revenue stream of Pascua Lama and is trading at low levels right now. You’ll probably get more bang-per-buck playing the latent behind-the-scenes royalty holder than ABX itself. But make sure you DYODD dude, as I own IRC.to in my long-term never-touch-it portfolio.