By popular demand (seriously, I’ve been told that this piece needs a blog-airing by subbers) here’s an update on Bayfield Ventures (BYV.v), the bullshit scam run by the shady management team, ridden for his own gains by Mr Self-Service himself Marin Katusa of Casey Research and…utter surprise…pumped as TheNextBigThing by LouisLobitoJames of Casey Research. So rather than do any real work today here’s what was written on the subject for IKN94 and published on Feb 20th (y’see the blog stopped for the vacay, but the Subscriber weeklies kept on rolling). Anyway, here’s the piece on BYV.v and what’s written below applies equally to the NR it came out with on Monday evening, as it’s just the same vein drilled over and over again. Bulk mining my ass. Enjoy.

Bayfield Ventures (BYV.v) and Brent Cook’s drill interval calculator
We’ve mentioned it before, it’s got a permanent link over at the blog but today I want to take a few more lines to extol the virtues of using the Brent Cook/Corebox Drill Interval Calculator (find your way there this link), a most useful tool that we non-qualified geology laypeople* can use to get a better handle on the drill returns laid out in a company news release and it greatly helps in sorting out the wheat from the chaff.
So let’s take an example of chaff to show how it works, the company in question being the overhyped and underendowed Bayfield Ventures (BYV.v) which is trying to make out that its neighbour play to Rainy River’s (RR.v) hot Ontario property is something that RR.v will have to buy out to make the area into an open pit gold mine. It’s total piffle, but as that’s never stopped a junior miner from promoting itself here we are.
What we’ve had from BYV from its ‘Burns Block’ property so far are intersections of a high grading vein or two that have been presented as a much wider mineralized body. This practice of ‘smearing’ a high grade intersection over a wider area is designed to give the impression that there’s a lot more economically viable rock under the ground than is actually the case and it’s just this type of sleight of hand that the Cook/Corebox calculator is good at rooting out. Here’s the cutting of last Thursday’s NR detailing the core returns:

What we see is that the hole in question, RR11-1, is presented as having intersected 116.6m of 1.05g/t gold that started at a downhole depth of 509.5m and finished at 626.1m. We then see that this intersection included three higher grading areas, in particular two parts of the total that were high grading stuff (0.7m of 21.6g/t gold and an eyecatching 2.2m 33.13g/t gold). Those kind of returns point to very nice rock of course, but if it’s from a simple vein system the absolute amount of economic gold contained is always going to be limited to the vein itself and ounces contained aren’t so likely to impress. But as we see, BYV is offering up the intersection as being a big, wide and far more easily and economically mineable 116m wide.

What the Cook/Corebox calculator does is show us the truth of the matter and here’s how it works in this example case. Go over to the Corebox website and in the top line of the box presented, plug in the length and the grade of the big interval. In this case the length is 116m and the grade is 1.05g/t. Next, in the lines of the box that follow add in any of the “including” parts you see fit from the NR. In our case we’re concentrating on the two high grade parts (0.7m at 21.6g/t and 2.2m at 33.13g/t) that BYV announced. Once all your info is in, hit enter for the last time and read off the “residual” at the bottom. This is the solution to the question and shows a) how much length is left after the inclusions are taken away and b) how much gold per tonne is in the rest of the drillcore. 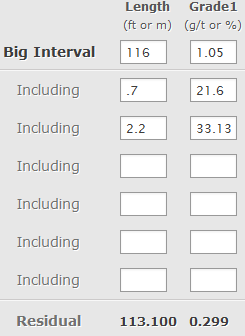 In the case of BYV’s R11-1 core, once you take out the high grade parts you’re left with 113m grading 0.299g/t. Believe me, nobody cares about that grade of gold at that depth as it would be far too expensive to haul it to the surface, as even with gold at $1400/oz and 100% recoveries that rock is worth less than $14 a tonne.
So what BYV has at Burns is a decent but deep-lying vein. But it’s one that it continues to drill at differing depths to make for a flashy news release every now and again and it’s also one that’s being used to make its case for being an indispensible part of its neighbour’s plan to build an open pit gold mine. Yeah, right.

Oh look, somebody decided to bid up and buy BYV Weds AM before the Thursday AM NR. Sheer coincidence, of course. We avoid.

IKN March 2nd back. Since that week BYV has dropped back to the low 80s again, which shouldn’t come as any surprise. DYODD, dude.