The Behre Dolbear 2013 Ranking of Countries for Mining Investment: “Where Not to Invest” survey is out and the blog Junior Gold Miner Seeker has kindly offered up a link so that you too can get your free copy of the PDF. But sadly, it’s not easy to take the thing seriously once you’ve scrolled down to this on page 2, the league table of the 25 covered countries. 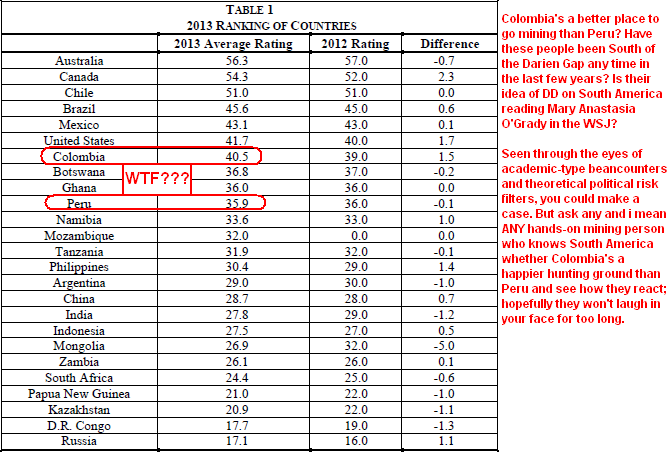 Now, we can argue the toss about the relative merits of Canada versus Australia, or Mexico/Chile/Brazil if you prefer, and within subjective reason I can at least accept a different ranking on those countries (and others) to my own thoughts. But Peru lower than Colombia? What are these dudes smoking?

However, IKN has spotted the Achilles Heel in Behre Dolbear’s scoring system and is here to help, with the hope that BD fixes things for next year’s survey. Here’s the problem, it comes from page 1 of the PDF and I quote:


So BD, as you might imagine it’s kind of difficult to take your survey seriously, what with the basic level errors glaring at you from the top. I didn’t get past page two, there really wasn’t much point.

UPDATE: Dear Matson15, it’s fucking Colombia with an “O”, not fucking Columbia with a U. Please continue showing your ignorance in other locations, fuckwit.