In a shock decision, the Argentina Supreme Court today ruled that the “Partido Nuevo Triunfo” (New Triumph Party), a political group run by a certain Alejandro Biondini, is prohibited from becoming a recognized political party and cannot run in any national, local etc elections. This is because, according the the bigwig judges, PNT is “illicit, because it promotes discriminatory practices prohibited by law.”

The question remains; will this draconian move by the puppet courtrooms bent to the will of the Hugo-loving Klishtina and her band of milksop lefty handwringers be protested by the Miami Herald, Fox News etc as a clear affront to the right of free speech? Let’s have a look at a bit of visual evidence showing Biondini and PNT paraphernalia. 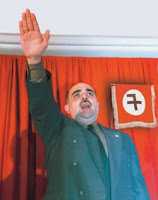 Ban the party? Chemical castration is more a like a plan, frankly.