As from 2010, Bolivia’s central bank is changing the wording on the reverse side of coins minted. 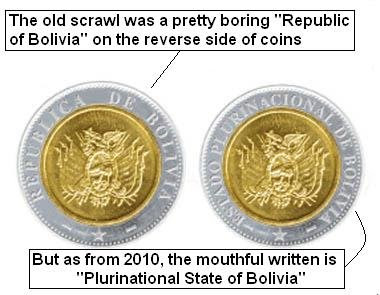 It remains to be seen whether the fascist jerks that claim to represent Santa Cruz are into plurinationalism.

In other Bolivia financial news, International Currency Reserves now stand at U$7.955Bn (which I think is an all-time record, but even if it isn’t it’s darned close). Also, Fitch said nice things about Evolandia using words like “stable” and “solid” and phrases like “fiscal surplus” and “GDP growth in 2009”. But don’t let facts get in the way of anyone telling you that Bolivia’s economy is in a mess, will you?