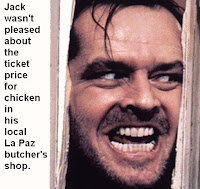 In 2008 and 2009 the Bolivia of Evo Morales fought the good fight and did what very few governments there had been able to do before them; Thanks to sound macro policy (and deflation in the world’s major economies) Bolivia managed to get its consumer price inflation under control.
No mean achievement, but all of a sudden there are signs that inflation is back and eating away at people’s pockets. Today’s announcement of August CPI at 1.06% is not a good thing and puts the 12 month trailing rate for CPI (what we normally understand as “the inflation rate”) at 2.6%.

But the real problem isn’t that headline 2.6%, rather the recent spike that’s baking inflation into the cake for the next 12 months. This chart shows the monthly breakdown and we see how the last three months have added most of the inflationary burden onto the 12 month trailer.

June, July and August combine to give 1.82% of inflation and that 1.82% will show on the annual numbers all the way through next year. As August 2009 notes, there is a tendency for a higher price spike in that month (this year the goverment blamed much of the 1.06% on rises in the price of potatoes and chicken, which is not much of a surprise during the Andean winter) so we’ll wait to see what September brings before shilling “we’re all gonna die!” at you. But inflation is rearing its ugly head once again in Bolivia and if Morales&Co wants to keep its good economic record intact they’d be wise to tackle the issue immediately.
DYODD.