Thank you to the many readers who have sent on the link of the interview given by now dead terrorist cell leader Eduardo Rozsa-Flores (ERF) in which he states that he was in Bolivia to organize a militia in order to force the separation of Santa Cruz (and/or the rest of the ‘medialuna’ region) from the rest of Bolivia.

In the interview (here in full on youtube, thanks MH) ERF claims his actions to be legal. Fortunately, we can point to a clearly defined document that shows he is wrong. The Moneda Declaration of September 15th 2008 came in the wake of the attempted coup and violence in perpetrated by the authorities in East Bolivia. Here’s the link to the whole thing in English, but here are points one and two of the nine point declaration:

1. Their fullest and decided support for the constitutional government of President Evo Morales, whose mandate was ratified by a wide margin in the recent referendum.

2. They warn that its respective governments energetically reject and do not recognize any situation that implies an intent of civil coup d’etat, the rupture of institutional order, or that compromises the territorial integrity of the Republic of Bolivia

This makes it abundantly clear that the whole of the continent of South America and other guest states such as Mexico categorically reject the separatist movement of East Bolivia, headed up by the people who funded ERF and his gang of now dead or arrested insurgents. ERF’s interview makes it abundantly clear that he was working to illegally divide Bolivia with the full knowledge of people such as Prefect Costas and Branco Marinkovic. There is now plenty of evidence for arrest of these people and I’m quite sure there’s more evidence to come.

As I mentioned before, I’m quite sure that foolish wannabe Dwyer had no idea what the hell he was getting involved in.

MEANWHILE, I received the following text and photo this morning as forwarded by a friend. Very interesting. so much for all that crap about them being unarmed in the hotel. 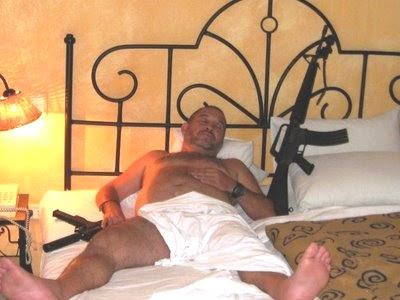 There is a photo Bolivian media today that has not yet been covered in
the international media. The photo can be found in the archives of
Eduardo Rozsa Flores blog from December 2008. It shows Rozsa Flores
sleeping almost naked with two automatic weapons in his bed.

The Bolivia right wing newspaper El Deber claims the photo is a fake
and not on the blog, but indeed it is on his blog, its just buried in
the archives. I found it there and the link is below. The text in
Hungarian seems to indicated that he published the photo to show his
friends what life in hiding is like. The news media in Bolivia has
confirmed the the furniture and walls match the Hotel Buganvilla in
Santa Cruz, a location not previously identified.

Regardless of why Rozsa Flores posted this photo, it does seem to lend
credence to the idea of a shootout rather than a cold blooded killing
of Rozsa Flore and companions in their underwear in the Las Americas
Hotel room.