Bolivia: Two arrests and one telescope

Foreword: I prepared this post last night for publication this morning. Later I went over to Bina’s place and found she had already covered both subjects…and better than me, too. So if this subject interests you make sure you hightail it over to Bina’s and read more and better with a ton more linkies, too.
Late yesterday Bolivian police made two more arrests as they try to mop up the terrorist cell built to certainly force an armed separation of Santa Cruz and most likely assassinte Evo Morales. PL reports that Juan Carlos Gueder Bruno, aged 48 and member of the far-right wing UJC in Santa Cruz (remember the guys with the the Swastikas on their rides?) along with an un-named second person thought at this moment to be a Paraguayan national known as “El Capitan” (the captain) who is known as an arms smuggler and supplier

Intriguingly, the official investigator into the terrorist cell said last night that he would be in a position to provide the names and positions of the people who were funding the group and would be making an announcement today, Wednesday. Watch this space. 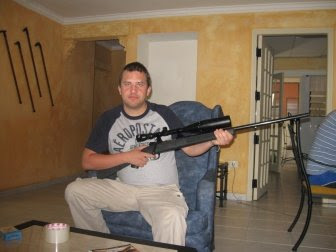 Meanwhile, more photos of the defeated terrorists have emerged. Elod Tóasó is one of the two people in the Santa Cruz mercenary gang that didn’t die in the shooting. He is presently in a jail cell somewhere in Bolivia waiting his turn to be heard, but when this photo was taken he was hanging out at the expense of the Santa Cruz lodges in one of the swankiest hotels in Santa Cruz, the five star Buganvillas. According to the hotel owners, Tóasó and cohorts were there for a couple of months and they all used false names, too. 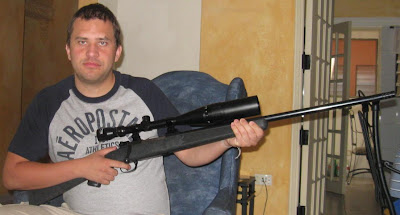 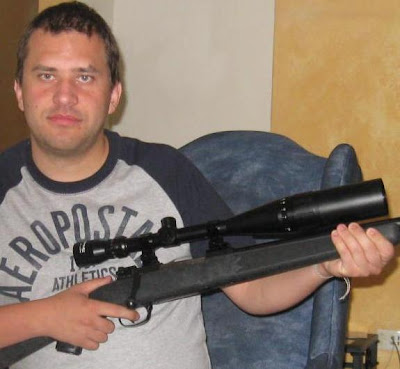 …….and I’m not the greatest expert on firearms in the world…….

….but that telescope looks like a serious piece of kit to me. Especially as we see it held by a Croatian war veteran who was trained in sniper warfare and likely knows what it means to put a bullet through the head of another human being at long range. So will you all just cut it out with all this innocent victim BS, yeah? This gang:

1) Was in Bolivia to do dirty work.
2) Got caught and are now either dead or in jail.
3) Deserving of nobody’s sympathy unless you happen to be fascist apologist scum.