Brazil: The biggest hint yet that Dilma will weaken the Real 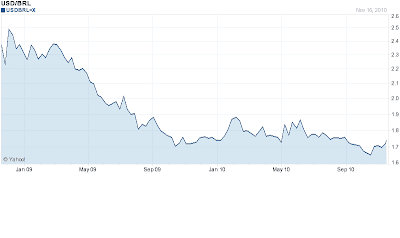 The Brazilian Real has lost over 0.5% against the US dollar today, because of this, reported by Mercopress

Brazilian central bank president Henrique Meirelles will not accept any invitation to remain as head of the bank unless president-elect Dilma Rousseff gives him full guarantees of “absolute autonomy” in running the institution. He also rejects the idea of holding on the job during the first quarter of 2011 until a definitive successor is named.

Apparently Meirelles seems uncomfortable with these reports and much less having his name linked to a possible “tampon” action while a successor to his post is nominated. The central bank president said that working with President Lula da Silva he was “never exposed to any sort of pressure or influence”.