Brian Paes-Braga makes it to the party

All that talk of just why Tommy Humphreys has suddenly forgotten to talk about K92 Mining on his scam pump site CEO.ca reminded me of the real reason, his pally pal and fellow Frank Giustra asslicker, Brian Paes-Braga, CEO of the Frank Giustra/Stan Bharti lithium thingy Lithium X (LIX.v). 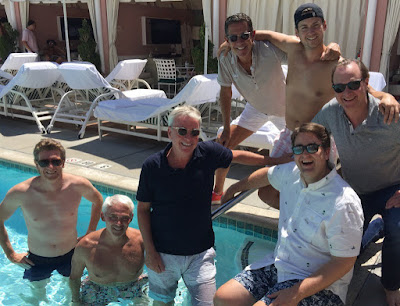 Here we see Brian, along with Tommy H (rockin’ that body cover Tommy), Frank of course and assorted hangers-on at Giustra’s 59th birthday party celebration last week, just before being serenaded by Billy Idol (and I know you all cried More More More, bless your hearts).
It was certainly good to see Paes-Braga there and relaxed at the party, because he almost pissed off his paymaster last year by nearly missing the 2016 party. That’s because Paes-Braga had been partying hard in LatAm and silly old him, slept through the next day and missed his vital flight to Vancouver. Luckily there was a solution. What with being CEO of a company with more money than sense he solved the issue and saved his job by phoning his manservant Lucas C, who chartered a jet to get him back to Vancouver and his boss, just in time. All the wasted flight and the crazily expensive last-minute charter was on the LIX.v company coin, of course and later buried in G&A or “investor relations” or something  but hey, who cares about the way these guys spent other people’s money, right? Right?

C’mon Brian, give us your best Rebel Yell.

PS: I honestly thought you were older than 59, Frank. You certainly look it. Anyway, feliz cumple che!