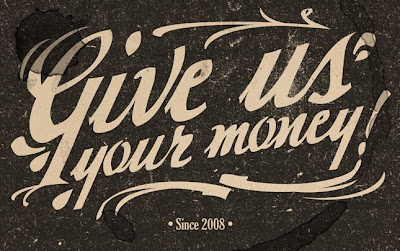 Thanks to a headsup from reader NK (thanks dude), here comes another story of how the greenhorn is parted from the contents of his wallet by those who care about buying SUVs more than looking after their investors. Caerus Resources (CA.v) has recently sprang out of the nothing by performing a quick reverse merger. It added a few names to the BoD roster while keeping things under the radar. Then one day after putting its head above water and consolidating (Feb 25th 2009) a guy called Jon Lehmann joins the board of directors. Lehmann is the VP Exploration at Ventana Gold (VEN.to), the rocket hotstock that’s proving up its Colombian property and making cool headlines thanks to the drill results.

So then, in true Vancouver scamster style, come the quiet low priced financing, the sweetheart deals and the general inside “friends-only-at-this-price” carve-ups done at pennies. Also comes the classic “we’ll allow directors on board that are owed money to swap debt for shares at 10 cents”. After that, suddenly CA.v announces to the world the following headline

And hey! wow! surprise! These “gold interests” that the company has “acquired” are scattered around the very same area that Ventana Gold is currently working. Now how the devil did they manage to find out the places worth staking, Mr Lehmann? As the area is currently getting plenty of publicity, this kind of headline catches the imagination as a neighbour play…then when people see that CA.v has 220,000 hectares around the hotzone, the wallets are unleashed and the stock flies.

BUT! If you actually read the PR and not just the headline, what we have is a company that doesn’t have a single area to its name in Colombia. All it has is a letter of intent (a LOI, those famous mining documents that may as well be written on toilet paper) to take over a local company called “White Gold” that has a subsidiary called “Oro Barracuda” that has applied for the right to explore some 220,000 hectares up in that corner of Colombia. Or in other words, CA.v has acquired nothing. Zip. Squat. Nada. What it has is a piece of paper that says it’ll take over a company that owns another company, as long as that company manages to secure the concessions it has applied for with the government of Colombia.

Not exactly “acquires gold interests”, is it? And especially when just last week the Colombian government passed a new mining code specifically designed to stop “concession squatters”, meaning that it will stop small miners like CA.v from claiming extra-large concessions unless they can prove they have the wherewithall to be able to move exploration forward quickly…in the case of CA.v, the staff involved here couldn’t even hike the area they want to claim, let alone explore its geological assets in any reasonable timespan. This brand new law is made to stop scamster speculators like Caerus in their tracks.

So anyway, the company fanfares this bullshit about acquiring 220,000 hectares and as the headless chickens that populate the stock market never bother to read small print, up she goes on the pump scam PR.

Reaction of management? Yep, you guessed it, they take da munneh and run. So far only Drummond (ex-minera andes) has filed….
….but it’s dollars to donuts that there are more to come. No wonder McEwen chucked him out of the head chair at MAI.to recently…would you buy a used gold mine from this man?

And as for our pal Lehmann, who joined the BoD at Caerus to get his hands on some cheapo shares and options in exchange for telling the other self-serving pondslime which parts of Colombia to stake, he suddenly resigned due to “potential conflict of interest”. Laughable. This is the calibre of staff that Ventana Gold is using to move forward its multisquillion ounce gold project? When it comes to Colombian gold juniors, caveat emptor should be front’n’centre.