Talk about geologists in love with projects…

Here’s a screenshot from this report in the economy section of Peru’s newspaper of record yesterday: 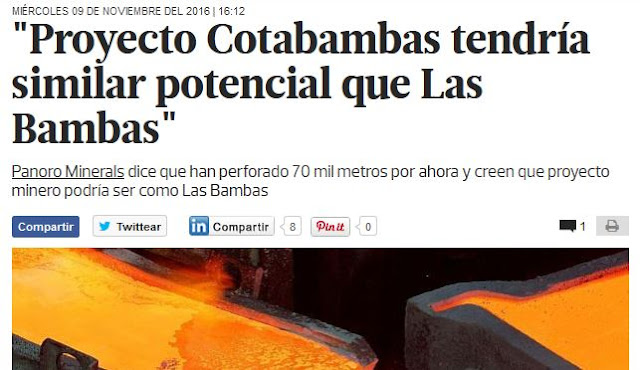 Yes, that is a title quoting the VP Exploration of Panoro (PML.v) about its Cotabambas project and yes ma’am yes sir, it does indeed translate as “Cotabambas project has the same potential as Las Bambas”.
Apart from a couple of little rounding errors, of course. Such as the way Las Bambas runs a copper grade of 0.73% in reserves (and 0.61% in resources) and has enough in reserves to run at 140,000tpd for 20 years. While Cotabambas has no reserves at all and its inferred resource grades an average of 0.33% Cu (what’s more most of that is 0.29% hypogene sulphide) and the company only gets the economics to marginal by using a $3.00/lb copper price assumption. It’s a bit like saying that 12 year old kid you saw playing footy in the park has the same potential as Lionel Messi. Y’know, both human beings, both got two legs, neither of them blind, both play football, neither fall over when running in a straight line…

Oh, and then there’s another thing about the Cotabambas project and they’d have to move a freakin’ provincial capital town in order to build the pit and surrounding infrastructure, so that’s slightly different from the working mine too. And the way Las Bambas isn’t owned by a bullshit two-faced pumphouse junior. So yeah, apart from all that it’s just like Las Bambas.